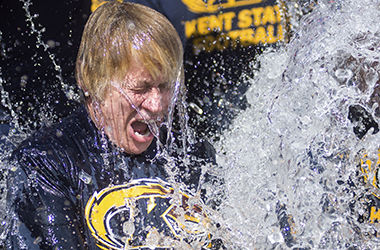 President Warren reacts as a bucket of ice water is dumped over her head as part of Kent State's response to the ALS Ice Bucket Challenge Tuesday, August 19, 2014.

When Rebecca Windover tweeted @PresBWarren to take on the ALS Ice Bucket Challenge, she never expected the mass support from the greater Kent State community.

“It shows what type of person she is and that she cares about students whether they’re undergrad students or alumni,” Windover said about Kent State President Beverly Warren accepting her invitation to do the ALS Ice Bucket Challenge via Twitter on Aug. 13.

Windover said her father-in-law, Mark Urban, was diagnosed about a year and a half ago with the disease. He started receiving hospice care Aug. 19 and was given one week to live.

Windover said Aug. 19 her father-in-law was in stable condition but in a comatose state.

“It’s definitely been hard,” Windover said. “The biggest thing has been knowing that death is a better option for him so he can no longer suffer from this disease and be in pain.”

The Kent State community showed their support for Windover’s family and those with Lou Gehrig’s disease last week as members of the football team doused Warren, Athletic Director Joel Nielsen and Head Football Coach Paul Haynes with buckets of ice water at Dix Stadium to raise awareness for the disease, also known as amyotrophic lateral sclerosis or ALS, that affects roughly 5,600 Americans per year.

“It so resonated with me because my brother’s best friend and fraternity brother in college succumbed to ALS after a five year battle,” Warren said. “What I’m so pleased about is…that Kent State University steps up when they’re asked to be challenged. Knowing how much this means to families like Becca’s family and mine and members of Kent State families who have battled this disease, it became natural to say ‘yes we’ll take this on.’ ”

Nielsen said when Warren approached him to participate in the challenge, the decision was a “no brainer.”

He said another member of the Kent State community, Susan Murphy, whose husband is the namesake for Kent State’s Murphy-Mellis Field, succumbed to the disease after being diagnosed with it one year ago.

“It’s such a debilitating disease,” Nielsen said. “If this is what it takes, it’s pretty easy to do. I hope this spawns more charitable giving for other worthwhile causes to start the ball rolling.”

For her and her partner, Rose Urban, the toll that ALS has had on their loved one has now turned into a “waiting process.” With the ice bucket challenge, Windover hopes the money generated will result in a hope for others afflicted with the disease.

“With ALS not having a cure,” Windover said, “hopefully with the challenge, all the money that is raised will help so that other families don’t have to go through what we are going through.”