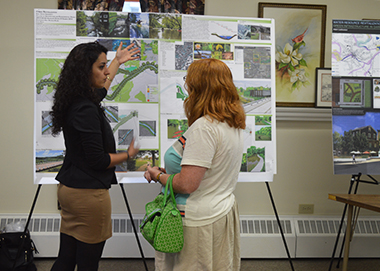 On the morning of March 24, Bill Willoughby, associate dean of the College of Architecture and Environmental Design, sent an email to the school’s faculty. The email contained an idea for an opportunity for the students of Kent State to create change in the small nearby community of Garrettsville. Just two days earlier a fire had torn through the rural village of about 2,200 people, destroying a section of buildings on the main street.

“It would be great for the faculty to find a project where we could help the town to maybe reconceive after the fire,” Willoughby said.

“We do this all the time,” Willoughby said, surrounded by poster boards of project designs in the village city hall. “But to me this is a special opportunity because, here’s a town that lost 25 percent of its downtown, and in coming here we saw that we could not just make a difference here, but make a difference in the community as a whole.”

Under the instruction of Adil Sharag-Eldin, associate professor and coordinator of the Masters program in CAED, the graduate students spent three months researching the geographic area, the village itself and the local community.

“I don’t think the city will choose any of our designs and say that’s exactly what we want to do,” said Katelyn Rossier, one of the graduate students that presented. “We’re just giving them ideas about what they could do.”

Those ideas ranged from Ryan Grande and Brie Constanino’s more scientific, data-driven presentation, “[Un]weaving Village Growth,” of estimated progressions in different parts of the city that could be used to help decide where and when to build, to Parva Majidi’s “Creek Revitalization,” that proposed a kayak livery, a business she said had potential in the riverfront village, and redesigned waterfront properties.

“People don’t realize what’s possible. They have a very thick set of what you think you can do in certain places and then when you present something beyond that box it’s interesting to see how their mind kind of opens up,” said Ryan Croyle, whose “Life Cycle” proposed a multiuse parking deck complete with a PARTA connection, community pavilion along the river and bike trails throughout the region. “I think Garrettsville is a place looking for a new image, and recreating buildings from one hundred and fifty years ago, even if they’re new buildings, to me, isn’t thinking forward.”

For some of the graduate students involved in the class, proposing designs for an entire community was much different than for an individual client.

Adam Ladouceur said that designing and implementing ideas for a rural village like Garrettsville was a different experience than urban cities. Ladouceur’s project, “Water Resources Revitilization,” focused on green construction and how to improve the village’s water treatment facilities.

Other students involved focused less on physical structures and more on improving the experience that residents have within the village.

With her project “Designing Memories,” graduate student Corinne Housley looked to see how the fire shaped the collective experience of the community. She proposed an outside green space on the sight of the fire complete with dancing fountains for kids, a welcome sign, outside movie theatre equipment and a flame-like sculpture representing the fire.

“So many things you don’t realize are memories until they’re gone,” Housley said. “Memories are unique to each individual and it’s very difficult to take the individual memories and create a space where anyone and everyone can create their own memories.”

Natalie Shellhorn’s “Village Walk” project proposed a 5-mile loop trail that would connect the entire village of Garrettsville with new or existing bike and hike trails. The pathways would connect, both physically and socially, the burned section of downtown with surrounding cul-de-sac developments, as well as the entire Northeast Ohio region. Her trail design included several nodes, stops along the way, each with a different purpose, including a farmer’s market stand, an outdoor music pavilion, a bridge crossing and an intricate bench system at the burn sight.

“I think this is what I would want from my town,” Shellhorn said. “If I lived in a town like this I would want to be outside, interacting with neighbors.”

While some of the projects focused on the environment or the culture, “Childproofing Streets,” the project of graduate student Tara Knapp, focused solely on the downtown section of the village. Safety, and the perception of that concept within the village, should be the new focus for the community, Knapp said. By designing new buildings and city streets with a focus on how people feel when they view those structures or walk those pathways, the experience changes and the residents is what’s most important.

“Designing as I have for the past four and a half years, I didn’t really think of the people as much,” Knapp said. “For this project, because we were really immersed and these people were very dedicated to wanting to rebuild and remember, that has been really inspiring to make sure the project worked and it wasn’t just something I thought was cool but it actually worked and was functional and could help the community.”

The other projects presented to the community consisted of “Ancillary Garden” by Dan Gorwin, “Main Street Revival” by Kiley Maas, and “Growing In” by Neil Abrams.

Matt Merchant is the editor of Kentwired.com and the summer Kent Stater. Contact him at [email protected]