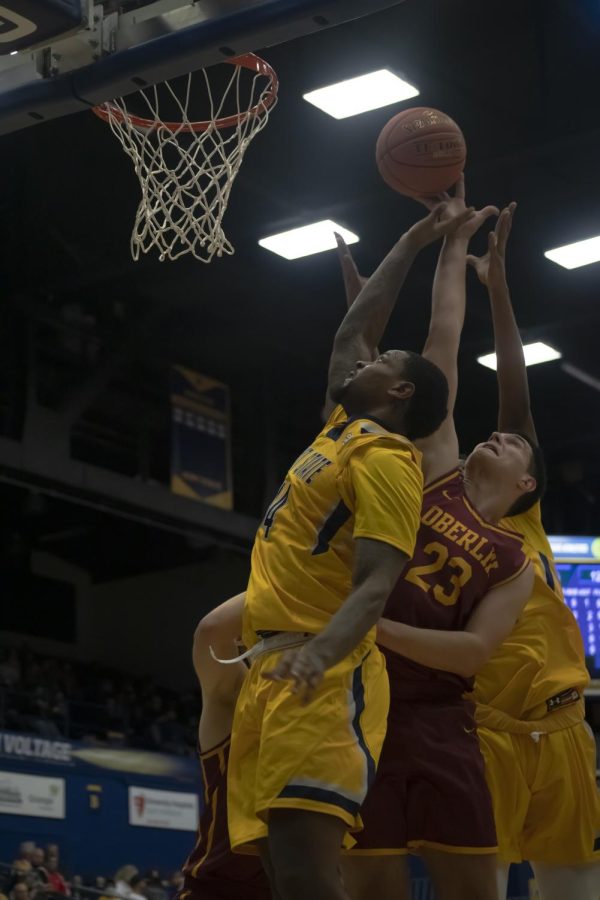 Redshirt senior forward Tervell Beck (14) fights to hit the ball into the net during the men's basketball game against Oberlin College on Nov. 16, 2021.

It was KSU’s first home game in front of a crowd since March of 2019, and the audience was entertained with a 51-point first half, including a 19-0 run at the end, and a defense that only allowed 16 points in the first, the lowest amount the Flashes allowed since 2007.

Coach Rob Senderoff said it was “awesome” to have fans back in the stands.

“Great to get a win,” he said. “Great crowd. The M.A.C Center is a really tough environment when it’s loud. It’s great for [the players] to see, and I appreciate everyone coming out.”

For a majority of the players, it was the first game they played at the M.A.C. center with fans present.

“It feels good,” redshirt junior guard Sincere Carry, who transferred to KSU from Duquesne in January, said. “But I’m just trying to stay in the moment. I’m not trying to be too high or too low. It felt good to get a win like tonight’s, but I know down the road there’s a much better feeling we’re going to have.”

“I’m trying to score more,” Carry said. “But I’m not trying to force it. I’m still trying to play the right way, get to my spots and just let the game come to me. I worked a lot in the offseason, getting my shot better.”

Carry was a big part of the Flashes’ offense in the first half, scoring 11 of his points and two of his three-pointers in a 10-minute span.

Redshirt junior guard Malique Jacobs was the team’s other leading scorer with 14 points. He also had a team-high four steals and was four-of-four on free throws.

Redshirt freshman forward VonCameron Davis had the best performance of his young KSU career, recording his first ever double-double as a Flash with 10 points and 10 rebounds, both career highs.

“I think I can be a great rebounder on this team,” Davis said. “Whatever coach needs me to do: score, rebound, play defense. I just want to be on the floor, I want to be able to play hard.”

Senderoff was happy with the way Davis played after not seeing much time in the first game.

“He had a great game.” Senderoff said. “To his credit, he worked hard the last couple days and then capitalized on his opportunities.”

Davis saw very little playing time last season, with only two games where he played for 10 or more minutes, and was on the court for one minute against Xavier.

Freshman center Cli’Ron Hornbeak, who was on the court very briefly against Xavier, had a solid first true game as Flash by going 4-of-4 on field goals, scoring 10 points and snagging eight rebounds.

Senderoff said that Hornbeak played great off of the bench.

“In hindsight, after seeing how well he played today, I wish I had played him some,” Senderoff said. “He may have been able to get a defensive rebound when we couldn’t. As he continues to develop, his confidence will continue to get better. He has a really bright future as a basketball player.”

Kent State’s defense held Oberlin to 38 points. The last time KSU held a team to 40 points or less was against Miami in 2008.

The Yeomen went 13-of-50 in the paint, and only one player shot for over 25 percent.

KSU forced 22 turnovers, 15 of those steals, and scored 30 points off of them.

Eleven different Kent State players were on the court for 13 or more minutes, and the Flashes scored 44 bench points.

Senderoff said throughout the season “we’ll have different people in there.”

“Hopefully some of these guys that came off the bench, that have struggled, can get some confidence going from tonight,” he said. “And hopefully they can really help us as we move forward because we need everyone to play well.”

It was a nice bounce back win for the Flashes, who dominated most of the game against Xavier, ranked third in the Big East, before ultimately losing after being outscored in the fourth quarter.

The Flashes were outrebounded 40-29 by Xavier. They flipped the script Tuesday, outrebounding Oberlin 46-25.

“We wanted to rebound the ball better,” Senderoff said. “In the couple minutes [Oberlin] had three offensive rebounds, in the last 37 minutes they had one. We certainly did a better job there.”

Kent State will next play in the Naples Invitational in Naples, Florida on Monday against James Madison at noon. They will also play on Tuesday and Wednesday, with their opponents and time depending on what happens in the tournament.