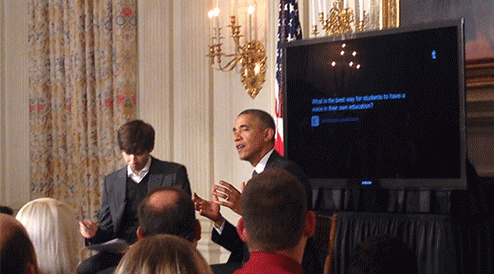 David Karp, founder and CEO of Tumblr, moderated the live stream and selected questions submitted to the White House earlier in the week. A select group of Tumblr users were also able to attend the event.

Topics ranged from the push for more STEM programs to gun control, and to where Obama sees himself in ten years. However, the President’s main point was clear: People who have college degrees are more likely to succeed than those who don’t.

Early in the chat the President acknowledged that student loan debt is at an all-time high, and rising tuition costs could deter future students from enrolling.

“Some people are wondering, is this a good investment? It absolutely is,” Obama said. “The difference between a college grad and someone with a high school diploma is about $28,000 a year in income.”

The President announced earlier this week that he signed an executive action that will allow nearly 5 million borrowers to cap their loan payment at 10 percent of their income – meaning that people who decide to go into lower paying jobs, like teachers, wont have as much of a burden come time to pay off their student loans.

He said in the chat he hopes that this will not only create more college opportunity, but will also encourage people to follow their passions.

“The main advice I would give young people starting off though is, ultimately, you’re going to do best at something you care deeply about,” he said. “You still have to grind it out, but you can get into that mindset where the creativity or the effort and the sweat that you’re putting into what you do doesn’t feel like a burden. It feels like an expression of what you care about.”

The President admitted that finding a career students are passionate about isn’t always going to be an option right away, and sometimes they might have to take a detour in order to pay the bills.

The chat took a more serious turn when a student from UCSB asked a question regarding gun control and what can be done about it.

The Huffington Post reported this week that since the shooting in Newtown, Connecticut in 2012, there have been an average of 1.73 school shootings a week.

“Our levels of gun violence are off the charts,” Obama said. “There’s no advanced, developed country on Earth that would put up with this.”

Gun control continues to be a prominent national topic of debate, and Obama said it should definitely be at the forefront of any presidential candidate’s agenda in the upcoming primaries.

The President said that, as of this time in his presidency, there is not much more he can do regarding gun control.

“If public opinion does not demand change in Congress, it will not change,” Obama said.