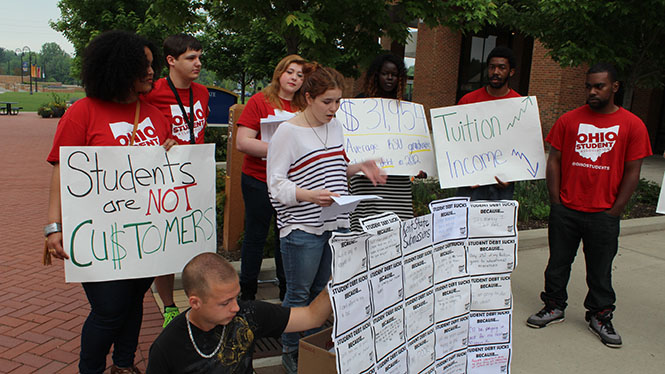 Members of the Ohio Student Association stand in Risman Plaza to protest the tuition increase.

Members of the Ohio Student Association gathered on Risman Plaza Wednesday morning to hold a demonstration protesting student debt. The participants said they were representing Kent State University, the University of Akron, The Ohio State University and other Cleveland-area colleges.

“We’re here today to stand up for the students who I feel don’t have a voice,” said Cassandra Cecil, junior psychology major and leader of the campaign.

Cecil said she was going to present the Board of Trustees with a petition of more than 1,400 signatures calling for an end to the credit cap and a freeze to tuition and fees over the next several years. Past petitions, she said, have been met with “ignorant disregard” by the Board members.

“It’s toyed around with as a vague concept. But it’s not a myth, it isn’t a fake concept. It’s a real thing,” said junior psychology major Sarah Adkins.

Adkins said it’s a constant battle for her to pursue her dreams when she is worried about her constantly growing student debt amount.

According to its Facebook page, the mission of the Ohio Student Association is “fighting for educational justice” and the right for everyone to receive and education.

Demonstrators held handmade signs with messages like, “I am a person, not an ATM,” and “Students are not customers.” The students also had a poster board  of handwritten messages from Kent State Students filling in the blank of “Student debt sucks because…” with answers of “I’ll be paying it back for the next 30 years” and “I’m going to die in debt.”

Before the students dispersed the group chanted in call and response fashion “I am somebody and I deserve full equality, right here, right now.”

University Spokesman Eric Mansfield said the group was very peaceful in demonstrating for their beliefs and that the student leaders had contacted the Board the previous week to find out the best way for their voice to be heard.

Matt Merchant is the editor for Kentwired.com. Contact him at [email protected].