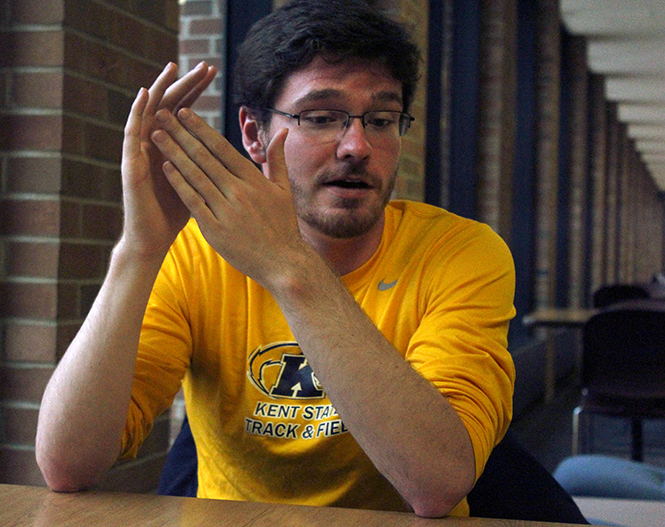 Junior educational studies major Kelly Baick  is an honors student planning to change her major for the second time. She is also a student athlete.

“It’s completely different from high school,” Baick said of maintaining her grades as an athlete. “My first semester as a freshman was really hard for me to figure out that balance. In high school, you could kind of half-ass school if you wanted to and kind of half-ass your sport, but here, you don’t have room for any of that.”

Baick no longer plays field hockey but still works for the team in its office. Like her teammates, she travels with the team and has to maintain her grades to do so.

Balance is key for student athletes to manage their team’s schedule on top of their coursework and social life. While athletes at Kent State struggle to maintain all three, they can find a medium by using the academic resources and time set aside by the athletic department for them to succeed in the classroom.

Assistant Athletic Director Talea Drummer oversees the football team’s academics and calculates each Kent State player’s NCAA eligibility. She said she tries to support student athletes academically by building relationships with them, checking in with professors and providing academic resources when a student needs help.

“It’s nice to have someone outside your coaches that’s helping you navigate through your academics,” Drummer said.

Drummer said the cumulative GPA for the athletic department has been rising for several years, and the current department GPA is a 3.1.

Nicolette Cregan, junior criminology and justice studies major and member of the softball team, said she has a tutor for her microeconomics class to help her maintain her grades. She said managing her time between athletics and academics can sometimes be difficult because she will have multiple tests and a practice in a day.

While she said her days can get hectic, she appreciates the resources provided to student athletes because they help her stay on top and get ahead.

“If you have good time management and good organizational skills, you may be studying at least a week in advance,” Cregan said. “So by the time those tests come, you’re not trying to cram all in one day.”

When the softball team travels, Cregan’s coach will designate two hours to “study tables” where the team can only focus on studies during that time on the bus. They also have time to get work done while at the hotel because they have a 10 p.m. curfew.

“It gets hard sometimes on the road, I think, to study for tests, but I think [Coach Karen Linder] making us have study tables definitely helps us to do better with our grades,” Cregan said.

Wrestling coach Jim Andrassy said the wrestling team’s GPA this year was above a 3.0 and has been rising for several years.

“When I took over as head coach, we had a 2.3,” Andrassy said. “And every semester that I’ve been head coach, we’ve consistently gotten better. Our highest GPA we’ve ever had was last semester.”

Andrassy said one of the first things he tells his team is that they have time for two things: athletics and academics.

He said the biggest reason the GPA has been rising is because of the type of student athletes being recruited.

“You have to recruit the right kind of kids that want to come here and get degrees and get good grades,” Andrassy said. “The second part of it would be our academic services.”

Provost Todd Diacon, who was the faculty athletics representative for six years at the University of Tennessee, said that in his experience with student athletes, the athletes are grateful for the opportunities they are given, but the one thing they would change is the lack of social life.

“The main complaint I heard from student athletes in the six years I was faculty athletics representative at another institution was they would do it over again — they wouldn’t trade it for the world — the one downside was they just didn’t have the social life that non-athletes have,” Diacon said.

While many student athletes only have time to focus on athletics and academics, Cregan said she thinks she has a balance between her academic, athletic and social life.

“I think it’s important,” Cregan said. “I obviously love the sport, so I want to dedicate time to that. Schoolwork’s extremely important to me, so I want to make sure I’m working hard there because that’s going to pertain a lot to my future. And the social life — I just like to be social. I think social life is what helps you get through some of the toughest times of college.”

Cross-country distance runner Adam Kendrick, a senior business management major, said his team puts its focus on athletics and academics. As far as a social life, Kendrick said his team doesn’t have time to go out, but they spend time together in the summer.

“It’s hard to get out of our circle because we just don’t have the time,” Kendrick said.

Kendrick said he is able to keep his grades up because he keeps his priorities straight. His coach allows team members to skip practice if they need to study if they have proven they keep up with their grades.

“The motto in track is ‘student, athlete, citizen,’ and things have to go in that order,” Kendrick said.

Kendrick said it’s difficult to get internships and extracurricular activities as a student athlete because athletes devote their time to their academics and their sports.

“Luckily, I was able to get a summer internship last summer along with training,” Kendrick said. “It’s hard to get those extracurriculars besides athletics to put on a resume.”

Kendrick said he thinks Kent State puts a lot of focus on academics and tries to provide services to help athletes succeed in the classroom.

“We give back, but really, the benefits equal out,” Kendrick said. “They help us get through school and be able to compete and get a degree.”