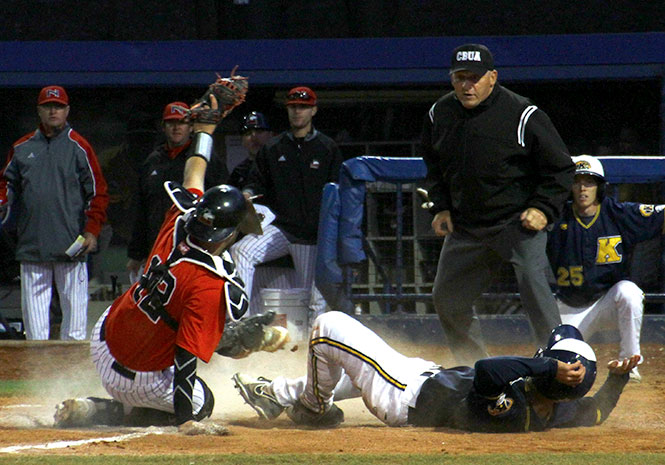 Junior infielder Sawyer Pollen is tagged out trying to score the game tying run with two outs in the bottom of the ninth at the game against Northern Illinois Saturday, May 3, 2014. The Flashes lost 6-5.

It was one wild weekend for the Kent State baseball team this past weekend.

After narrowly overcoming Northern Illinois (15-32, 9-12 Mid-American Conference) 4-3 Friday to snap a three-game losing streak, the Flashes (30-17, 14-7 MAC) split he weekend series with the Huskies to take two-out-of-three at Schoonover Stadium.

Nothing has come too easy for the Kent State baseball team these past couple of weeks, and this weekend’s tough series against a hungry, in-conference competitor like Northern Illinois was no exception.

In addition to the aforementioned “wild” aspect of the weekend, it was also a bittersweet weekend for the Flashes, with the weekend beginning bitterly, but ending so sweetly.

Unfortunately, for the sake of chronological order, this recap must start with the bitter first, but the sweet is soon to come.

In the second game of the three-game series Saturday, the Flashes fell victim to a questionable call at the plate in the ninth inning of the game.

Kent State and Northern Illinois were neck-and-neck through all nine innings of the ball game. The Huskies broke a 5-5 tie in the top half of the ninth with a run. In their home half of the inning, the Flashes threatened Northern Illinois’s newly established lead by putting runners on base, but the tying run was called out at the plate when freshman infielder Curtis Olvey singled up the middle and junior infielder Sawyer Polen was gunned down at the plate on a close tag out at home to end the game in favor of the Huskies, 6-5.

The play at home in which Polen was called out at the plate could have went either way, but Kent State head coach Jeff Duncan and Kent State fans alike vehemently argued the close call.

Either way the fans, coaches, players or umpires sliced it, Saturday’s loss was a rough one because the Flashes had 10 hits and only one defensive lapse, but they still came up short, and it’s a shame that such a close game like that had to end in that fashion.

“It was a wild game [Saturday], just one of those games,” Duncan told Kent State Sports after Saturday’s wild one at Schoonover Stadium. “We had a little bit of miscommunication on defense that cost us, and our at-bats weren’t throughout the whole game.”

Kent State took an even harded blow than the loss back in the first inning of Saturday’s game when junior outfielder Alex Miklos, a key member in the heart of the order and one of Kent State’s biggest bats hitting out of the number two hole, was injured and had to be removed from the game.

It is unknown at this time what the extent of Miklos’ injuries and how long he will be out, but the Flashes certainly wish him a speedy recovery. The Flashes have enough depth in its roster to replace Miklos in the outfield for the time being, but not having his bat in the lineup will be a big loss.

As Miklos sustained his injury and retired to the bench, Northern Illinois starting pitcher Eli Martin exasperated the rest of the Kent State lineup at the dish and marveled Kent State fans on the mound.

He threw a complete game, pitching 142 pitches while allowing two earned runs, one walk and 11 strikeouts.

“We have to get past the game and look at being just a little better Sunday,” Duncan said. “We still have a chance to win this series,” Duncan told Kent State Sports.

Duncan was not wrong either, as Kent State used Saturday night’s tough loss as motivation going into Sunday’s series finale.

“After a few close calls [Saturday] night, it amped up the focus that much more for Sunday,” Kent State starting pitcher Brian Clark (5-6, 4.10 ERA) said. “Just a little motivation to focus in a little bit more Sunday.”

Unphased by the loss that could have gone either way, depending on how generous the umpires were in Saturday’s game, the Flashes came out of the locker room Sunday ready to play, and they were on their game Sunday afternoon.

Propelled by arguably Clark’s best outing of the season and even his career, Kent State came out of Sunday’s game on top, 8-2, to get the W and

“[Clark] had a great outing, one of the best of the season, if not, the best this season,” Duncan said. “Just really good, efficient in the strike zone, he had really good stuff today. His [velocity was good, it was coming out of his hand real well, and he competed.”

The 6-foot-3 redshirt junior out of Munroe-Falls set the tone of the game for his team and powered the Flashes through 6.1 innings, only giving up one run, six hits and three walks en route to his fifth win of the season.

Clark also touted seven punch-outs in his 12th starting appearance on the hill for the Flashes this season.

Clark said he was happy with his performance Sunday and commented on his composure on the hill, saying that he became more comfortable against the Huskies once he worked ahead in the count.

“[I allowed] a few walks here and there, a couple base hits through, but I think I settled in and tried to throw more strikes to get ahead of the hitter,” Clark said.

Clark and Kent State’s offensive unit fed off of each other the whole game and both parts of the whole played integral roles in the Flashes’ victory Sunday.

With Clark’s help, the Flashes took command of Sunday’s game and blew it wide open in the second inning, exploding with five runs right off the bat. When the offense put up runs early on in the game, it supplied Clark with the confidence and run support he needed to pitch the game of his life.

“It’s a giant confidence booster, throwing five runs up and going out there just makes the game go a little bit quicker and makes you pitch with more confidence,” Clark said.

Kent State added two more runs in the sixth inning and one final cushion run in the seventh to solidify its advantage and stick it to the team that might have very well stolen Saturday’s game with a little help from the officiating crew.

One thing that stood out for Kent State in the rubber match, though, was the big fat goose egg underneath the errors column on the scoreboard.

The Flashes did not commit a single error in what could be described as a fundamentally clean defensive game played by Kent State. Lately errors have either cost the Flashes or helped them win in critical games this season, and this time around, the Flashes sidestepped the errors column and played proficient, impermeable defense the entire game.

“Everybody’s going to make miscues, especially at this level, but good teams reduce the runs when they do make the miscues and good teams make them pay when they have the miscues, so we need to remember that, and we’re not going to be perfect,” Duncan said. “We strive to be perfect, but it’s not gonna be perfect every time we come out. We just have to learn how to minimize when we do have mistakes.”

Duncan said a sweep would have been nice this past weekend, but taking two out of three from Northern Illinois will give his team enough of a push

“We needed the momentum going into Muncie next week, so I wish we could have swept, but taking two out of three is pretty good,” Clark said.

The MAC West Division powerhouse in Ball State (32-15, 16-4 MAC) currently has a 2.5 overall lead in the MAC over Kent State. The Flashes are still the MAC East Division leaders with a 1.5 game lead over Buffalo, but the team will have a chance to overtake the Cardinals and seize overall control in the conference if it can take at least two-out-of-three in the most pivotal series of the season for both these teams.