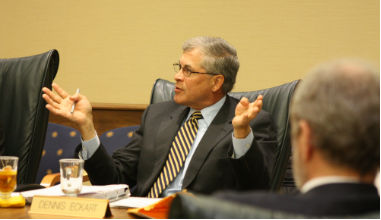 Kent State University student tuition will increase 2 percent effective for the 2014-2015 academic year, a change the Kent State Board of Trustees approved at its meeting Wednesday.

The increase will be part of the approved $648 million operating budget for the 2015 fiscal year and will help fund student financial aid and scholarships, staff compensations, computer software updates to the entire university and an expansion of the library collections. The tuition increase accompanies new course fees that will go into effect during the fall semester.

Gregg Floyd, senior vice president for finance and administration, said the increase does not change the statewide tuition ranking of the university and is necessary for the university to operate effectively.

“Essentially over half of the tuition increase is going toward the new (operating) budget,” Floyd said at a Board subcommittee meeting. “We’ve had to become more self-sufficient in terms of enrollment and tuition.”

University spokesman Eric Mansfield said the increase in tuition is estimated to generated more than $5 million in additional revenue. He said the total increase would be about $11 million.

The Board also approved a change to the university’s unlawful discrimination policy to include the category of transgender, from a category of sexual orientation to that of gender identification.

Student Graduate Trustee Monique Menefee and Undergraduate Student Trustee Alex Evans proposed, and the Board approved, the creation of a new Student Trustee Alumni Society, with the goal of creating a professional network for past, current and future student trustees.

The Board also presented several formal resolutions recognizing the retirement of university president Lester Lefton, board chair Jane Murphy Timken and the departure of vice president Eugene Finn, who will be taking a position at Columbia University. Also recognized were retiring deans Gregory Andrews, dean of Kent Tuscarawas, David Mohan, dean of Kent Geauga and Twinsburg, and Stanley Wearden, dean of the College of Communication and Information.

University Provost Todd Diacon led the committee, speaking of first generation students, Pell Grant recipients and that he has “every indication that (retention numbers) will be exceptionally good.”

The committee explained how they are “mindful of the stresses” students face each day with money and the work-life balance, and announced that Kent State has reached the national level of “the 1:300 ratio of academic advisor to students.”

“For the first time in over 50 years, we are bringing all of the art students together,” Crawford said. “It is especially important for students who are not working in isolation, but learn from each other.”

The building will house fire arts (ceramics, jewelry, glass, etc.) as well as textiles, painting and other art majors while “embodying flexibility for future learning methodologies and programs,” Crawford said.

The committee seeks to continue fundraising and share results with a wider alumni population as well as form focus groups to continue research.

“We can pull younger people into these focus groups and have a sort of cross-representation,” Finn said, incorporating a younger audience to the older group of alumni reached by telephone surveys.

Vice President of University Relations Iris Harvey showcased the new website and explained the “ease of use was the most important element.”

The website now features information in a more prominent way than before and has integrated info-graphics into the pages, creating a mega menu that allows students to easily access information.

Integrating downtown Kent and other surrounding areas into the site is something Lin Danes, director of Web Services and Interactive Media, found to be important.

“We’ve woven in factoids,” she said. This allows parents to have an idea of how their children will be spending their time in college.

The Board also elected new officers for 2014-2015. The new positions include Dennis Eckart as chair, Stephen Colecchi as vice chair, and Richard Marsh as secretary.