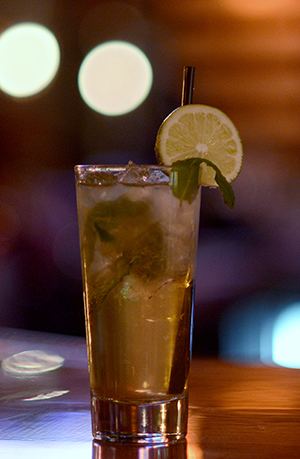 Bar 145 opened just over a year ago, and it hasn’t taken long for the gastropub’s drink specials to be considered among the area’s best. Featuring a martini menu with items like the campfire martini (which includes a roasted marshmallow covered in chocolate and graham cracker) and the birthday cake martini, manager Eddie Walaszewski said it isn’t hard to stand out.

“We’ve got a lot of wildcards out there,” he said. “Things that you don’t normally see around here.” In addition to the extensive martini offerings, Bar 145 also specializes in bourbon – one of the three B’s it includes right on the building. Walaszewski promises that that particular B will only be getting more important to the restaurant in coming weeks.

In addition to the ever-popular trivia nights on Monday, Bar 145 will start running bourbon specials.

“We’re going to start focusing on bourbon and running different deals each week,” he said. Plus, with the patio opening again soon, Walaszewski said customers can look forward to an updated drink menu just in time for the warmer months. “What’s better than having a nice alcoholic beverage on a hot summer day?”

Ray’s Place features a variety of cocktails and mixed drinks such as Long Island Iced Teas, Futher Muckers and Amaretto Sours. Ray’s Place can mix up just about anything under the sun.

“Ray’s Place is one of my favorite places to go to with a group of friends on a Saturday night,” Smith said. “The Long Island Iced Teas are my favorite drink to get when I’m there.”

“When the college crowd comes in, our Long Island Iced Tea is definitely a favorite,” Thomas said. “We sell more of those on a busy night than anything else, but we still have plenty of other drinks to offer.”

Other best selling drinks include the Futher Mucker, vodka and rum drinks.

Water Street Tavern owner Mike Beder says that delivering a good quality and consistent drink allows the bar to keep serving up some of Kent’s best cocktails. He also acknowledges that the bar stays on top of drink trends so that students can get what they want — as well as sticking with Water Street’s best-known drinks.

“We do have a few signature offerings, like the Mongolian Motherfucker, Pinnacle Pails and Fishbowls, that set us apart,” Beder said. Bartenders such as Daniela are willing to serve up new mixes as well as a variety of classics — all to best serve each customer.