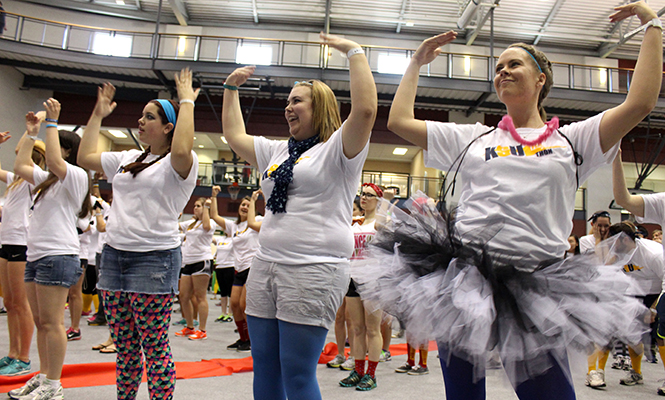 The group "Flashanthropy" showed their support at Flashathon, the 12 hour dance marathon raising money for Akron Children's Hospital and the fight against cancer Saturday, April 12, 2014.

Andy Lovrak, a junior advertising major and Flash-A-Thon executive board member, said the board set out to beat last year’s number of participants and raise more money. Lovrak said the event not only exceeded last year’s numbers but their own goals as well.

Lovrak said he got involved with Flash-A-Thon because the event was a great cause and he wanted to see it succeed, which it did, he said, reaching more than 500 registered participants.

But for many participants, Flash-A-Thon means more to them than just raising money.

Abby Myers, junior human development and family studies major and Flash-A-Thon executive board member, said she fell in love with the patients after participating the 2013 Flash-A-Thon.

“We met Ava last year at Flash-A-Thon when she became our superstar,” Myers said. “She was diagnosed with leukemia at the age of four and finished her last chemotherapy on Feb. 2. Ava is now six and cancer-free.”

Myers said Ava is a normal girl who enjoys Katy Perry, dancing and all things that sparkle.

“This year I was able to meet another family that has become dear to me,” Myers said. “Ryan was only three when he started to experience cold-like symptoms that lasted about a month. On Halloween of 2010, a tumor was found the size of a football that was pushing his lung up into his heart. The doctors removed the tumor and half of his left lung, but after meeting Ryan, I never would have guessed that was his story.”

Myers said Ryan is an energetic, loving, six-year-old boy who loves to swim and play with his little sister, Rowan.

Myers said she got involved with Flash-A-Thon 2013 because of her love for Penn State. Penn State is home to the largest dance marathon in the world, THON, which raised more $13 million last year.

“When I discovered Kent State was starting its own, I was not going to miss the opportunity to help it get started,” Myers said. “I have a love for kids and with my future profession being a child life specialist, I wanted to help out as much as I could. Flash-A-Thon is hands down the best thing college has offered me.”

Holly said she is a member of Kent State’s chapter of Phi Mu, which has philanthropic ties to Akron Children’s Hospital.

“This event [Flash-A-Thon] is actually really close to me because our philanthropy is Children’s Miracle Network Hospitals, or CMNH, and all the proceeds of Flash-A-Thon go to CMNH,” Holly said. “Also, my good friend, Jeremy Shaw, helps out a ton in Flash-A-Thon and hearing him tell me all the stories about last year’s event made me really excited about participating this year.”

Along with collecting monetary donations, Myers said there was a hair-cutting ceremony.

“I believe there were 15 girls who donated their hair,” Myers said. “The length requirement was eight inches, so we weren’t expecting a huge turnout, but you’d be surprised how many people become selfless when they’re in the moment, which is really awesome.”

Myers said she commends the 15 girls for doing it, because it wasn’t easy for her last year.

“It’s a scary feeling getting all your hair chopped off,” Myers said. “I donated mine last year and, of course, I missed it immediately, but it was going toward a great cause, and I’m glad those 15 girls realized that as well.”

Throughout the event, the executive board encouraged participants to tweet using the hashtags ‘#KSUFlashathon’ and ‘#DanceFTK’ and by 8 p.m., the hashtag was trending worldwide.

Myers said the whole event was more than she could have asked for.

“With the help from the students of Kent State and their friends and families who donated to the cause, we topped our goal and finished with $22,354.90 for the cancer patients at Akron Children’s Hospital,” Myers said. “I couldn’t help but cry at the reveal. It just amazes me what college students can do when they come together with the same passion. All I have to say is, FTK [For The Kids].”

Donations of any amount are being accepted until April 30. To donate, click here.