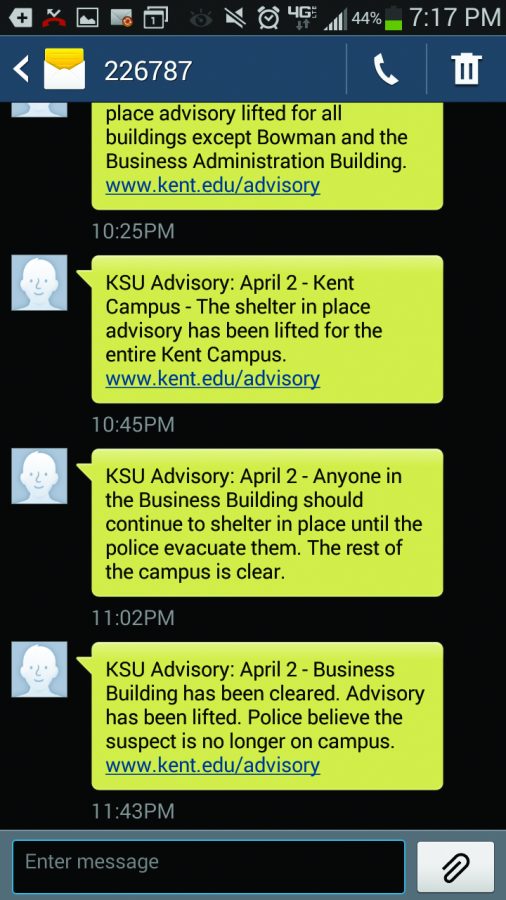 Flash Alerts System Text Messages Sent Out During the Lockdown

A “shelter in place” advisory for Kent’s main campus was put in effect around 8:50 p.m. after reports that a shot was fired near Bowman Hall.

The advisory was in place for about two hours. A text alert was sent out around 10:45 p.m. that read, “The shelter in place advisory has been lifted for the entire Kent Campus.”

However, a text alert sent out around 11:02 p.m. said those in the Business Administration Building should continue to shelter in place until police evacuated them.

Matt Radigan, police support services manager for Kent State’s police department, said there was a miscommunication between the department and University Communications and Marketing.

“It’s such a fluid situation when you’re clearing [buildings],” he said.

“Somebody was under the impression that based on what they heard, we were all good. And it could have come out that way from the officers’ standpoint you’re hearing from the radio. However they heard it, the UCM staff figured, ‘OK, well, we’re good to put it out.’ The fun part is then trying to get a hold of the UCM staff to say, ‘Hey, you got to reverse that.’ ”

Radigan said the police department puts out the initial alerts, then University Communications and Marketing works on disseminating the information on a larger scale.

“We put out the initial one, and then UCM gets with our incident command or whoever’s in charge of the incident and says, ‘What’s next?’ and then we feed it to them. They take over that alerting process.”

Those initial alerts are controlled by Rave Mobile Safety, an organization that sets up safety solutions for government, colleges and universities, according to its website.

Radigan said although there was a discrepancy in the text messages sent out, announcements in the Business Administration Building let students, faculty and staff know they were still under lockdown.

However, Kady Dalton, a senior mathematics major in an intermediate microeconomics class in the building, said she and her classmates were confused as to what was going on.

“They came in early on at like 9:05 and asked if we heard anything,” she said. “We said no, and they said to stay in there.”

Dalton said they didn’t hear anything else for more than two hours.

“Once a girl got yelled at for going in front of the windows, but that was it,” she said. “It was really annoying that no one let us know anything.

People were pulling up random things on their phones of what their friends were telling them was happening.”

Once the alert came that campus was cleared, a few students wanted to leave, but the professor, Emmanuel Dechenaux, told them to stay.

However, she said it wasn’t clear from the police what they should do.

After some students wanted to leave, the text alert came telling them to stay sheltered in place in the Business Administration Building.

He said one explanation for the discrepancy is the way the alert system is set up with cellphone providers and users’ cellphone service.

“Depending on your digital provider and depending on where you are at the time [the alert is sent out], it can recycle,” he said.

Mansfield said if a person does not have cellphone service or if the digital provider experiences an issue with the message delivery, the message skips on to the next person, and the skipped person will not receive the message until all of the other messages are delivered.

He said more than 53,000 people are signed up for the text alerts, so the delay can sometimes be lengthy.

Radigan explained part of the issue might be related to cellphone towers.

“Every cellphone tower, there are three sectors,” he said. “It’s a triangle at the top. Forty-five text messages per minute can come out of one sector. That means in a minute, 45 times three can come out of this tower. How long does it take to reach 57,000?”

Once people get the texts, many of them called or texted friends or family members, Radigan said, which clogged these cells, or sectors.

Another issue with the alerts is the delay between text message and email alerts.

The first text message was sent out around 8:50 p.m., and the first email alert was sent out more than a half hour later, around 9:37 p.m.

“That’s the first alert that goes out,” he said.

He said after text messages are sent out, updates are posted on social media and Kent State websites, with email usually being the last alert to be sent out.

“That tends to be the least effective in a crisis,” he said. “People want information now, and [text messages] tend to be faster because people are always checking their phones.”

“Police are dealing with an ongoing situation, and that only happens periodically throughout,” he said.

Quavaugntay L. Tyler, 24, a freshman criminology and justice studies major at Kent State, was arrested for carrying a concealed weapon Wednesday night at Robinson Memorial Hospital in Ravenna where he sought treatment for his left hand from a gunshot wound caused by his own weapon.

A text alert announcing the advisory had been lifted was sent out at 11:44 p.m.

A text alert sent around 11:56 p.m. said the suspect had been apprehended off campus and there was no longer a threat.