Capital Cities to perform at Kent State for FlashFest 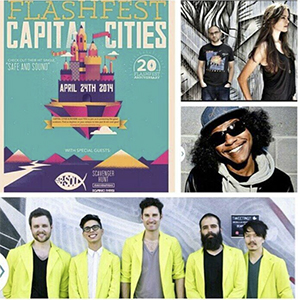 Undergraduate Student Government confirmed April 2 that the bands Scavenger Hunt, Ab-Soul and Capital Cities will be performing at this year’s FlashFest on Thursday, April 24.

The official announcement came from the Twitter page of Marvin Logan, director of USG programming.

Logan built up the reveal throughout the day on Twitter and gave the final confirmed performers in three different tweets.

Logan and other members of the programming board are in charge of choosing the performers that come for FlashFest. According to Logan, a few key factors go into the decision.

“We try to chose performers with genres that will compliment each other,” Logan said. “The programmers and I pay attention to up and coming artists, billboard charts and people we feel would fit student interest when making the final decision.”

According to The Key, a website for local music in Philadelphia, Scavenger Hunt is a duo made up of singer Jill Lamoureux and composer/producer Dan Mufson.

Scavenger Hunt is currently on tour and working on an EP including their single “Lost.” The Key writer, Bruce Warren, describes the single as “a melodically infections electro-pop jam with sultry vocals by Lamoureux.”

According to rapgenius.com, Ab-Soul is best known for being a part of the hip-hop group Black Hippy formed in 2009. Along with Ab-Soul, Black Hippy includes rappers Jay Rock, Kendrick Lamar and ScHoolboy Q. Independently, Ab-Soul has two albums.

The main act, Capital Cities, call themselves an “indie electro band” on their website. The band, formed in 2010, is most commonly known for their Multi-Platinum single “Safe and Sound.”

According to Capital Cities’ website, after being nominated for one Grammy and one VMA, the band will play at festivals including Bonnaroo and Coachella.

Logan said, FlashFest will include a day of events and entertainment outside leading up to the performances.