May 4 play shows different side of history 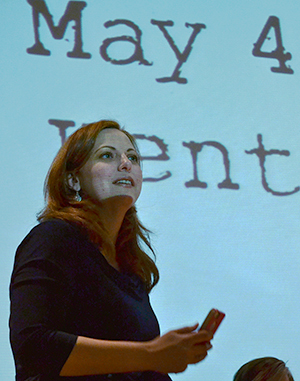 Case Western University's Shannon E. French mediates comments from the audience after the dramatic reading of the play "May 4th Voices: Kent State, 1970" in the Kiva, Wednesday, April 14, 2014. French read a CNN news update from her smartphone about 40 veterans that died in Phoenix just hours after her speech on the importance of paying attention to the needs of war veterans.

Cleveland-area actors performed a dramatic reading of “May 4 Voices” Tuesday, April 23 in the Kiva and showed the audience different perspectives of what happened on May 4, 1970.

The play, written by Wick Poetry Center Director David Hassler for the 40th Commemoration of the events of May 4, was based on the Kent State Shootings Oral History Project conducted by Sandra Halem. “Voices” was also made into a video production directed by special education graduate Katherine Burke.

“So I thought, ‘Well, there must be a lot of voices of people out there who feel like I do, and have stories,’” Halem said. “The same people tended to be interviewed year after year. So we heard the same voice, and tonight we hear very few of the people who were interviewed in the first 10 years.”

The Kent State Shootings Oral History Project features 115 interviews of people linked to the events on May 4, 1970, including National Guardsmen, KSU staff and students, protestors, Kent residents and elementary school children. “May 4 Voices” takes 60 of those interviews and compiles them to give various perspectives of how differently everyone felt before, during and after May 4.

The cast of this version of the production was Michael Regnier, Deborah Magid, Maryann Morris, Nathan Lilly and Eric Schmiedl. “Voices” was produced by John Morris, directed by William Hoffman. The stage manager was Maryann Morris, sound design and DJ was RMX and graphic design was done by Jimmy Scherer.

After the 90 minute production, a talkback, moderated by Shannon E. French of Case Western Reserve University in Cleveland, gave the audience a chance to have a conversation with the cast, crew and hosts about the events of May 4.

While the group discussed accessibility of information through technology and how it helps people today learn, Major Daniel “Maj” Ragain, lecturer at the Wick Poetry Center, reminded the audience of how important it is to listen to voices now. Ragain was a graduate student at Kent State on May 4, 1970 and excerpts of his poem “May 4, 1970 / A Memory” is featured in the film version of May 4 Voices.

“I hope people continue to come hear the living voice, the present voice. There’s nothing more personal, nor public, than the voice,” Ragain said.

Senior guest student Tom Tubalkain was encouraged by his creative writing professor to see the play and said he was pleased with the performance. Tubalkain was a freshman at KSU on May 4, 1970.

“I thought [the play] was excellent,” he said. “I actually watched the original one on the Internet a year or two ago and thought it was well-done.”

For more information on the events of May 4, 1970 please visit www.library.kent.edu/May4.