Keeping up with the curriculum changes 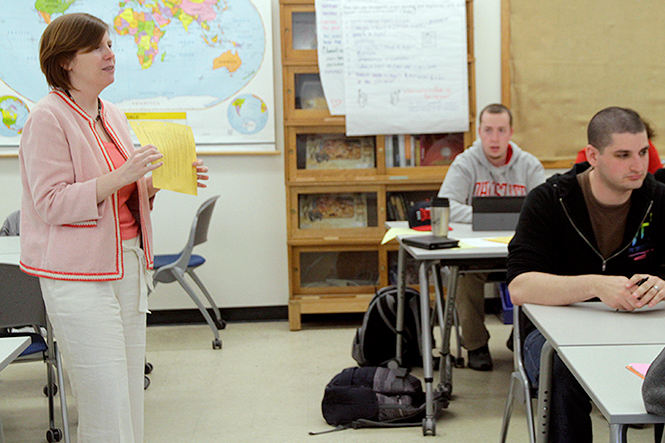 National changes in curriculum standards are shaping the education of students at Kent State and other schools across the nation. Beginning in the 2014-2015 school year, education students will be using new standardized tests, which apply to states that have adopted the Common Core.

Education students have to pay close attention to multiple changes at childhood education levels when planning their own lessons, and professors must monitor the effects at the university level.

In 2010, Ohio officially adopted the Common Core, a set of curriculum standards for students to have learned in subject areas like language arts and mathematics, and is one of the 45 states to do so. The effects of the proposed new system of standardized tests won’t be implemented until the 2014-2015 school year.

Associate Director of Admissions Mark Ledoux said this year’s freshman class would be the first group affected by the Common Core.

William Kist, associate professor of teaching, learning and curriculum studies, said all of his students get copies of the Common Core and are required to write lesson plans with objectives taken from those standards.

“Essentially we’re preparing people, most of which will teach in Ohio, to be familiar with whatever curriculum is going to be used in Ohio,” Kist said. “And as of now that is the Common Core.”

Alicia Crowe, associate professor in teaching, learning and curriculum studies with a special focus on social studies, said the idea of a national curriculum has been an ongoing argument for years.

“This is the biggest movement toward something national that ever has really stuck,” Crowe said. “If it keeps going in this way, this will have been the biggest shift ever in something that’s national.”

The recent proposed changes made to the SAT test are bringing it more in line with the Common Core, according to the College Board website.

Crowe said standardized tests could be useful but only if they are used effectively.

The Common Core isn’t the only thing teachers and professors have to be aware of when preparing curriculum. Crowe said there are accrediting agencies, state mandates and school standards that determine how courses are structured and what curriculum is planned and taught.

“How we’re accredited as an organization to license teachers plays in because we have to think about what is it that we have to have met and how do all those parts play together,” Crowe said. “We put so many pieces and parts together so we meet all the requirements, but also so we do what’s best for preparing our students.”

Crowe said professors have to not only think about good content that will prepare students to teach what is expected in Ohio, but also teach them enough so they can continue to grow on their own if they find a teaching position outside Ohio.

Kist said his department of 7-12 grade follows their professional organization’s standards for each subject area’s content.

“Yes, we pay attention to the Core, but we’re most responsible to our professional societies,” he said. “We have to turn in documentation every few years showing that what we’re teaching is preparing people to be English, math, social studies and science teachers.”

Crowe said her department just changed course’s titles and will be introducing a new course in fall 2015 after dropping an old one. She said she considers this a major change.

“We’ve been going along with the courses we had and no matter how hard, we tried and reorganized, there’s just more that they need to learn and more that’s required,” she said.

Crowe said her social studies department changes the courses in some way, shape or form each semester and said she thinks each department in education does the same.

“We’re always tweaking, changing and adjusting, and new pieces are always added and dropped,” she said.

Joanne Arhar, the associate dean for the college of education, health and human services, said testing is huge in her college.

“In education, our students are very much driven by tests and grades,” Arhar said.