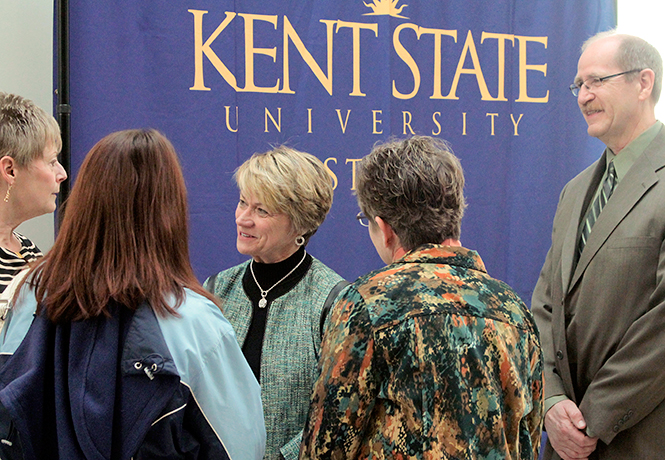 Warren will visit Trumbull’s campus Friday from 3 to 4 p.m.

Warren started her Thursday morning at Kent State Stark, where the campus hosted a welcome celebration for the incoming president. She then traveled to Tuscarawas, East Liverpool and Salem campuses later in the day.

“What I think about the importance of regional campuses is that you are the anchor institutions in your community, and it’s so important to serve that role,” Warren said at a welcoming reception at the Stark campus.

Warren emphasized that in her first months of presidency, she plans to listen and learn from the Kent State community what it means to be “one Kent State University.”

“We all teach and learn in a Kent State environment,” she said. “We are all faculty, staff and administrators at Kent State University, and our footprint is large … I will find that out tomorrow. But I think we are Ohio’s univeristy, and and we should own that and know what that means.”

While at each campus, she held a reception line where all those who attended were able to meet with her and shake her hand.

“I was very impressed with how many faculty and staff turned out for this so early in the morning, as we were her first stop,” said Cynthia Williams, public relations coordinator for Kent State Stark.

Williams said everyone was impressed with her attendance at Starkand said as she was very personable and easy to talk with.  While at Stark, Warren was even seen participating in a selfie with a student, as well as posing for pictures with others.

After greeting everyone at the welcome receptions on each campus, Warren ended them with a few last remarks.