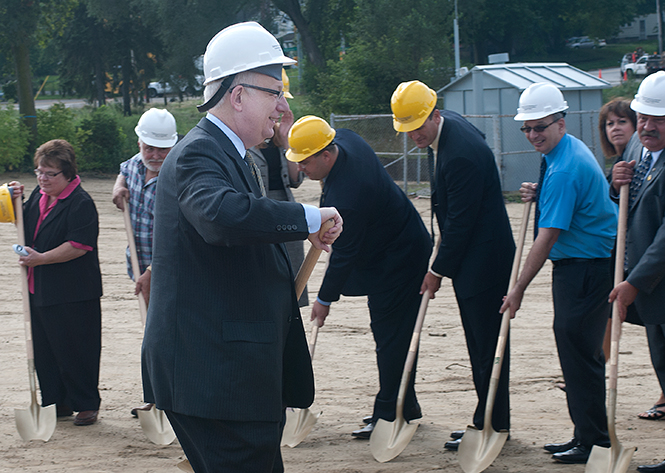 The alleyways were dirty. Roadways were crumbling, and buildings were falling apart in downtown Kent.

For 30 years, the city of Kent and the university made plan after plan to try to revitalize Kent’s city center.

“I had probably seen 10 projects never happen for political reasons or land acquisition,” said Economic Development Director Dan Smith. “How do you turn around when you get into two to three decades of disrepair?”

The answer: the combination of getting the city, the university and funding from government and private investors on the same page at the same time.

“We needed to do something,” said Sue Nelson, 33-year owner and president of Sue Nelson Designs, whose business has been in its South Water Street location for 25 years. “I think everything has just come together at the right time. I feel the positive energy in the area. To be here and to see it, I never thought I would see it. It’s been a long time coming.”

Kent State President Lester Lefton — who will leave his post at the end of June — is one to thank for bringing the bulldozers, cement, funding and resources to revitalize the downtown Kent economy, change the face of a city and university and form a lasting partnership between the two.

Within the first months of Lefton’s presidency, he quickly realized what the university needed — a hotel.

“Having the hotel was very important because I recognized that it was the fulcrum around which everything else would develop,” Lefton said. “Once the hotel was built, it seemed clear to me, and people I consulted with, that other things would fall — restaurants, bars, clothing stores…”

Lefton and Kent City Manager Dave Ruller joined forces, and during a lunch at Franklin Square Deli, drew out their plans for downtown on a napkin.

“If it didn’t work out, the worst case is that we would all be fired,” Lefton joked. “This was a big risk on the city’s part, the university’s part and the foundation’s part.”

Despite a bleak economic environment and plummeting economy in 2007, Lefton set out to fundraise and find private donors to build the hotel.

Instead, the Kent State Foundation — which manages donations made to the university — pledged $16 million to build the Hotel and Conference Center.

Because the Foundation took on the project instead of a private investor, the university is making profits on its investment.

“For all the development partners, if they didn’t see the Esplanade and the cohesiveness with Kent State playing a major role in the Hotel and Conference Center, I don’t think you would see the corporate and anchor tenants,” Smith said.

Other public and private investments fell into place.

Ron Burbick, a Kent businessman, was the first private investor who funded the $20 million construction of Acorn Alley I, Acorn Alley II and Acorn Corner — which now provides retail space for Tree City Coffee, Belleria Pizzeria and Off The Wagon Toy Store.

Fairmount Properties, a Cleveland-area development firm, invested $27 million to build the Erie and Main Street complex, which houses corporate tenants AMETEK and Davey Tree, restaurants Fresco and Bar 145 and retail such as UniversTees.

Lefton also stepped up when the city applied for a TIGER grant — one of 50 federal grants funded by the American Recovery and Reinvestment Act — to build PARTA’s Kent Central Gateway Multimodal Transit Center, which would provide parking for Kent State’s Hotel and Conference center.

“We hustled — the university, the city and PARTA — we wrote a grant and went to Washington and talked to legislators and ultimately got one of these $25 million TIGER grants to build this multimodal facility,” Lefton said. “I’m not convinced we would have gotten the hotel without the TIGER grant.”

The city of Kent invested $12 million to round out the $120 million of investment.

Five years of negotiations — including land swaps, obtaining building permits, legal hurdles and finally what brick to use — stood in the way of laying the bricks for the first buildings of the project.

“It’s like putting a jigsaw together,” Lefton said about drawing the revitalization map that would become the reality of downtown Kent.

Weekly meetings, all of which Lefton attended at the beginning of the project, were where building details — like at which intersection the Kent State Hotel and Conference would be located — were chiseled out.

“It was working through the details to satisfy the key players,” Lefton said. “Everybody realized what we needed to do. We needed to build a hotel and conference center. We needed retail surrounding it and connecting it to the university. Should it be on this corner or that corner? Should it be three stories or five stories? The details are what took some discussion.”

Lefton said the debate about whether to make the hotel and conference center two different buildings took a few months to solve.

The city bought the Franklin hotel — now Buffalo Wild Wings — when it had graffiti and pigeons in its old, abandoned brick confines. After spending $7 million on the old hotel, the project’s total bumped up to $120 million.

To get the buildings — especially the transit center across from the Hotel and Conference center — the city used its eminent domain rights and went to court for some of the land rights.

Lefton said the commercial press building, where the transit center now stands, was worth $240,000. The city went to court to fight for the land that it valued at $740,000.

“We were willing to accept it,” he said. “It was a dilapidated building, and we were going to tear it down anyhow, but there was $110 million of investment waiting to be cued up.”

Aside from lengthy talks planning downtown details, Smith said the city also lost a bid from the Sierra Nevada Brewing Company that would have created more than 300 new jobs.

“Timing wasn’t quite ready at the time,” Smith said. “We got down to the top three and went through all the negotiations and got kicked out despite the extreme amount of effort put forth to get them here. For every 300 of these projects that gets signed, 100 don’t make it.”

Development started on East Main Street in 2009 when Acorn Alley I started construction.

“Ron Burbick in 2009 was cranking to get it going, and he was doing it at a time before the rest of us got out of the gate,” Smith said. “Ron wanted to show, and he did it at a time when we wanted to prove to some people that this wasn’t just going be talk and planning.”

Tom Gavozzi, owner of Belleria Pizzeria in Acorn Alley and a student at Kent State in the 1970s, said he sees a whole new atmosphere in Kent.

“As I recall as a student here, there were a few bars and tattoo parlors, and that was it,”Gavozzi said.  “Now you look around at the big investments … people spent a lot of money to really make it happen down here. There’s some really nice restaurants and corporate offices and industry moving this way.”

In the next six years, the structure and façade of the four-block radius of downtown Kent would change.

“We’ve been getting a lot more student activities that we weren’t getting at the other location, which is good,” he said. “Our customers have changed. I think there’s a lot more foot traffic and there’s a younger clientele this way.”

Construction crews pounded the first steel poles that would form the foundation for AMETEK, Panini’s and Davey Tree into the ground in October 2011. Smither’s Oasis was added to the corporate tenants that would move into the complex by the summer of 2012.

The parking garage — called the Kent Central Gateway Multimodal facility — opened in June 2013.  One of the last pieces to complete but the first on the books — the Kent State University Hotel and Conference Center — was also opened to the public in June 2013.

Construction of the Hotel and Conference Center began in summer 2012 and finished June 14, 2013, months after Lefton announced his retirement from Kent State.

“We have clients from all over who come into see us and now stay at the convention center  and hotel, and they can walk downtown — it’s so convenient,” Nelson said. “We can take them to places to eat and have entertainment with  tickets to the Kent Stage depending on what they like. It’s so much fun. I cant imagine no benefitting from it.”

The physical connection between the university and city was solidified with the completion of the esplanade last summer, which was officially named the Lester A. Lefton Esplanade last December.

“Everything is interconnected,” Smith said about the increase in town-gown relations. “We’re joined at the hip. There’s no more ‘your half of the boat is sinking.’ ”

City officials now say the city of Kent has become a destination.

“No longer are parents coming to Kent, dropping off their children on campus and leaving right away,” said Lori Wemhoff, executive director of the Kent Chamber of Commerce. “Now they come and stay, shop and eat in Kent.

“Business is booming, the economy is strong, and there’s a pride about being in and from Kent that hasn’t always been the case,” Wernhoff said. “The business community is well aware of the student population being a huge part of its customer base. We’ve worked together to provide a downtown that students and Kent State faculty/staff can be proud of and help sustain.”

The financial and economic outlook for the city is also brighter with 700 new jobs created as a result. Property taxes on the new and renovated buildings are also expected to bring in $730,000 compared with $52,000 before renovations, Smith said.

With the opening of the new municipal courthouse earlier this month, the city has decided to focus on revitalizing other parts of Kent and downtown.

“I really attribute that to Kent being in the news so often with the downtown,” Smith said about new development plans. “Once you’re hot, you can negotiate a lot better.”

Smith said city eyes have shifted to improving the housing market — especially student housing — and to renovating the south and west ends of the city.

While Lefton looks to hand off the baton on his presidential duties, he thinks there is more to be done downtown.

“I think developing apartments and condos for grad students and new young faculty is important, and I think bringing in a Trader Joe’s would be terrific,” Lefton said, also adding a bowling alley, movie theater and other entertainment venues to the list.

While city plans maintain momentum, the university’s building plans do, too, with more than $200 million of development in the works — including a new architecture building starting construction in the next six to eight months.

With his effect on downtown, Lefton has created a foundation for incoming president Beverly Warren to take town-gown relations to the next level.

“He is the one that really stuck with us side-by-side through the hard times and said, ‘alright let’s break down some barriers and do things differently’,” Ruller said. “I hope he realizes that as he hears us talk about our excitement with Dr. Warren coming, the only reason we can talk about it is because of the accomplishments we’ve had with him.”