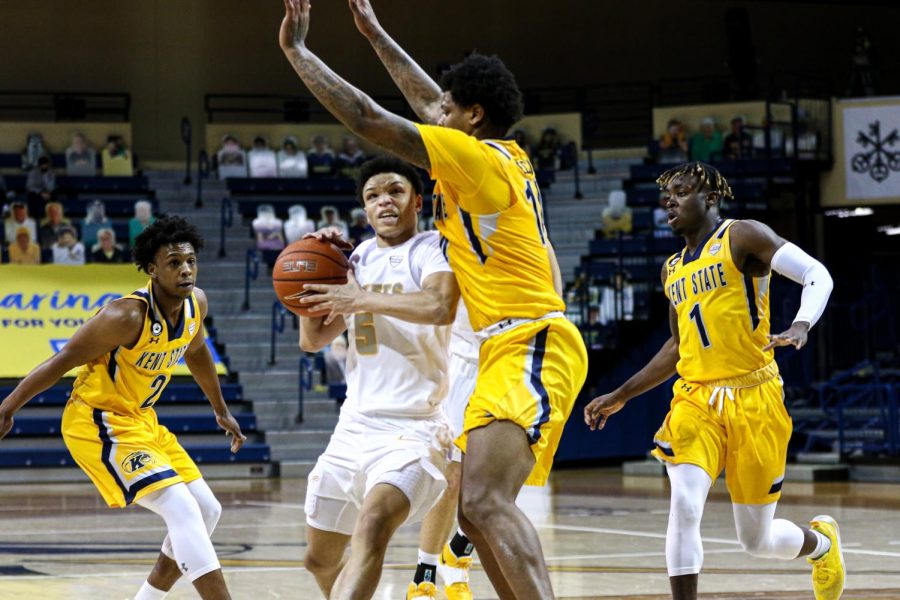 For the second time this season, the Kent State men’s basketball team lost a two point game against the University of Toledo, falling 76-74 in Toledo.

This loss snaps a four game winning streak for Kent State, which now finds itself with a record of 7-4 overall, 4-3 Mid-American Conference.

After playing from behind for most of the game the Flashes took their biggest lead, a three point margin, with just over seven minutes left to play.

The final play came after almost 10 minutes of dead time, as the referees deliberated how much time was left following a Toledo player deflecting the ball out of bounds.

Once the clock was settled at 1.8 seconds, left senior guard Mike Nuga’s game-tying layup didn’t fall, and though senior forward Danny Pippen grabbed the rebound he couldn’t put it in before the clock expired.

Though the final play didn’t go their way, Nuga and Pippen, along with fellow senior Tervell Beck, were their team’s defiant leaders today.

Nuga led the team with 19 points and was very efficient, shooting 42.9% from the field and 44.4% from beyond the arc for four 3-pointers. He added three rebounds, two steals and had just two turnovers.

Pippen and Beck were strong on the glass, with 12 and seven rebounds respectively, to help the Flashes out rebound Toledo 41-31 and score 18 second chance points.

Pippen was able to bounce back from his season low of six points last week, scoring 17 points and dishing four assists along with his team-high rebounding numbers, but had seven turnovers.

Fellow forward Beck was Kent’s only other player to score in double digits, finishing the game with 16 while shooting 71.4% from the field. He was very aggressive on the offensive glass, with five of his seven rebounds coming on offense.

Senior forward Justyn Hamilton also had seven rebounds, tying Beck for second most on the team, along with four points.

Toledo leads the MAC in perimeter offense this season, shooting over 36% from 3-point range, but Kent was able to keep pace from beyond the arc. The Flashes had seven 3’s on 30.4% shooting to the Rocket’s eight on 30.8%.

Nuga carried the brunt of perimeter shooting for Kent with his four, while Pippen, sophomore guard Giovanni Santiago and junior guard James Jordan added one each.

Santiago’s three accounted for his only points on the day but, as is typical for the sophomore from Puerto Rico, he contributed in other ways. In a team-high 37 minutes Santiago four rebounds, four assists, four steals and just one turnover.

The Flashes will stay on the road to try and restart a win streak as they travel to Muncie, Indiana to face Ball State University on Tuesday, Jan. 26. Tipoff is at 7 p.m.

Owen is sports editor. Contact him at [email protected]