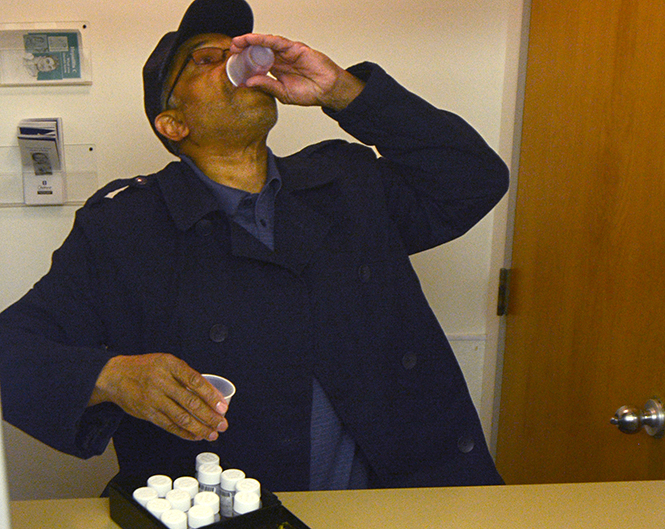 Robert “Bert” Smith runs a small provisional group for heroin addicts in the basement of his mother’s home in Portage County every three weeks, anonymously and free of charge. As a recovering cocaine addict himself, he finds security in helping others get clean. Smith said his precarious past has made him a reserved man who finds joy in simple pleasures. While he does not have a mobile phone, he does have a one-year-old German Shepard named Buck, who lays at the feet of welcoming guests as they share their reasons for working toward sobriety.

“Pills never seemed like that big a deal. Then I started shooting up,” said a 22-year-old member who wished to remain anonymous. The others nodded in agreement. “I feel manipulated by my own body.”

His experience isn’t rare. A legislative crackdown on prescription painkillers in Ohio is partly responsible for the spike in heroin-related arrests and deaths in both Portage and Summit counties since 2010, a trend that continues to rise as heroin supply increases and costs plummet.

These laws mandate patients see their doctor to refill prescriptions rather than having them called in, limiting availability. This restricts both doctor and patient access to numerous prescription painkillers. Dr. Greg Johnson, medical director at Community Health Center in Akron, said the number of Americans who have access to painkillers is growing due to the Affordable Care Act. In essence, because more individuals are covered, more are abusing painkillers and, eventually, heroin.

Johnson said the clinic has seen a swell in heroin users over the past couple of years, which clearly reflects an outbreak in the area. The clinic treats hundreds of users a day, mostly Caucasians of both genders, and has seen a spike in both younger and pregnant users.

“They’re knocking down the door, quite honestly, and it’s for a couple different reasons, but there’s no question that there’s an increase of heroin across the state,” Johnson said.

Opioids are pain relievers by practice, binding to receptors in several areas of the body, including the brain and spinal cord, to limit pain signals to the brain. Common prescription opioids include Vicodin, Percocet, Oxycontin and Lortab. These account for more fatal overdoses than any illegal drug, including cocaine, heroin and hallucinogens combined, according to State Medical Board of Ohio. Due to similar properties and effects, including feelings of euphoria and numbness, they are frequently a gateway to heroin.

Addiction sets in once the user has both a physical and mental need for the substance, sometimes severely altering the behavior or personality of the person using, said Becky Mason, director of Outpatient Programming at the Community Health Center. Withdrawal symptoms set in, and the addict does anything in his or her power to avoid feelings of sickness.

“It just becomes a way of functioning” she said. “Just doing basic life things, which is part of the compulsion to do anything it takes to not get sick.”

This year, the Kent charged four people with possession of heroin, nearly half the arrests for possession police made during the entire year of 2013 and quadruple what they saw in 2010. In 2013 alone, 14 heroin-related deaths plagued Portage County.

In an investigation of drug abuse trends in the Akron-Canton area, a study by the Ohio Substance Abuse Monitoring Network found that most participants reported the availability of heroin and prescription opioids to be extremely high in the area. Brown powdered heroin was most common and was most often taken with cocaine for the “speedball effect.” This occurs when users combine substances with different effects, such as uppers and downers, in an attempt to experience positive feelings and avoid negative ones.

Today, heroin prices are much less expensive by some estimates as low as $10 a bag, while access to prescription painkillers can cost an individual anywhere from $30 to $80 a pill, according to law enforcement officials.

Lt. James Prusha of the Kent Police Department said Kent has a heightened awareness as a result of the trend but continues to do what it always has instead of implementing new programs.

He said the penalties for drug offenses are not dependant on the drug itself, but rather, the amount of the substance in question and intended use. Therefore, someone charged with intention to sell Vicodin may be punished more severely than someone carrying a gram of heroin for personal use, according to the Ohio Revised Code.

“I’ve been a police officer for 17 years and every time I find somebody with drugs other than marijuana, I’m looking it up in my law book,” he said. “The drug abuse section in the Ohio Revised Code is huge, and it’s different penalties for different types of substances …”

Johnson said during the early 1990s, physical pain was treated as a vital sign. When patients visited their doctors for a casual check up, they would be asked to rank their pain level on a scale of one to 10, alongside blood pressure checks and stethoscopes, even if the patient hadn’t expressed concern about it. They would then write a prescription, and a distinct surge in medicated Americans was the result. Potency gradually increased as manufacturers worked to satisfy consumer’s growing immunity to their products, while doctor’s handed out prescription painkillers with dangerous ease.

With many bottles unfinished, pills — mainly prescription opioids — made their way into society.

“We are a drug society; There’s a pill for everything,” Johnson said. “It’s not an inner city problem; It’s a problem across the whole socioeconomic classes.”

Both Mason and Johnson said they believe Gov. John Kasich has taken the issue seriously but recognized the need for legislative improvement.

For example, Medicare covers inpatient treatment but doesn’t always cover the drugs used for the process. It will cover prescriptions from an outside clinic but won’t pay for the clinic visits, they said. Many times there is not enough money for inpatient housing.

“For a lot of folks it’s hard to get clean without good, stable housing,” Johnson said.

While Smith has been clean for 15 months, he doesn’t reward himself for the feat. He said he’s not interested in expanding but hopes the group of four benefits from what he is already offering.

“When I was a younger man, I made some really poor decisions,” the 42-year-old said. “I don’t remember where I was during my son’s fourth birthday party. I don’t give myself credit for not being on drugs; That’s like being proud of yourself for not beating your girlfriend. You shouldn’t do it anyway.”