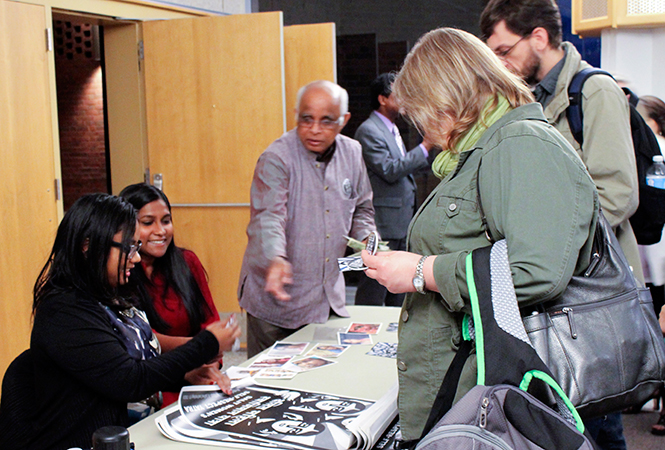 Asha Kowtal and Thenmozhi Soundararajan sign posters after their presentation on the issues of sexual violence toward the Dalit (untouchable) caste of India at Kent State-Stark, Thursday, Apr.10, 2014. They sell the posters as part of their fundraising methods.

There are two sides of India, according to Thenmozhi Soundararajan, an American director, singer, trans-media artist and journalist and a second generation Dalit woman.

The first is a fantasy India that has beautiful landscapes, exotic animals and clothing and magnificent temples and a second, invisible India, where every hour two Dalit people are murdered, she said.

This invisible India was the reason why Soundararajan and Asha Kowtal, the general secretary for All India Dalit Mahila Adhikar Manch, spoke Thursday night to faculty and students at Kent State Stark as part of the Faculty Speakers Series.

At the beginning of the presentation, Paul Bagavandoss, Ph. D., biological science professor at Stark, explained the Dalits are the lowest members of the Indian caste system, a class system people are born into and can never move out of. They were once known as the “untouchables” and are not truly considered part of the caste system; they are outside of it and considered to be embodiments of pollution.

“We reject the term ‘untouchables’ for us,” Soundararajan said.  “Because why we take on an epithet as the name of our people.  So the term that we use is ‘Dalit,’ and Dalit means broken by oppression but surviving.”

According to Soundararajan and Kowtal, there is limited data available about the violence inflicted upon Dalit women due to the fact that neither the police nor doctors listen to their complaints.

Kowtal said the caste system is enforced through Dalit women’s bodies and is used to teach Indian communities that they cannot leave or move within the caste system.  “It’s reprisal violence; it’s violence of revenge,” Kowtal said.

“The idea is that the act of rape is to dehumanize the woman, destroy the unit of the family, and basically contain and control a community to make sure that they never again assert their rights,” Soundararajan said.

Soundararajan’s most recent film project is showing this untold story to the world to get people to listen and to fight the injustices present against the Dalit people, primarily women.

During the presentation, she showed a trailer for the film which contained many graphic photographs and video footage of Dalit women, young and old, dead and alive, that were viciously beaten, raped or killed and then paraded around her village.

“It was a very hard decision to share what the results of the caste system are,” Soundararajan told the audience. “But one of the reasons why I decided to have some of that graphic imagery is that it’s not just a photo. That’s someone’s mother. That’s someone’s daughter, someone’s sister. And we might not know her name but it could be anyone of us here.”

In efforts to rise against the Indian caste system, the Dalit women banded together and took a stand by organizing a march, the Dalit Mahila Swabhiman Yatra, which lasted for a month and a half this spring. Women of all ages participated in the march across four different states within India. The women collected information from victims, survivors and victims’ families and presented these cases to the different district commissioners and demanded these cases to be heard, Kowtal said.

Kowtal and Soundararajan told the audience that although they are college students, they could help contribute to fighting the injustices against the Dalit class by spreading the word.

“There are a lot of ways to be part of a collaborative community in ending this system in our lifetime,” Soundararajan said. “The first thing is whatever resonated for you tonight, tell five people about it…”

“Telling people is so important for this,” Kowtal said, interrupting Soundararajan. “Once you know, you cannot be silent. This is why it’s really important for you to tell your friends.”

Senior psychology major Justin Miller said he knows after hearing Kowtal and Soundararajan’s presentation, he needs to do something.

This just blew me away,” he said. “I never knew that so many women were suffering in such horrible ways, that a group of people was being so dehumanized.  I could never imagine that, but now that I know it, I have to do something to help this in any way I can.”

Soundararajan and Kowtal ended their presentation by teaching the audience one of the chants to make Kent State Stark’s presentation a stop in the Yatra (march).  “When we say, ‘Dalit Mahila Shakti,’ which is Dalit women’s power, you reply with ‘Zindabad, Zindabad,’ which means up, up, or like yes, yes,” Soundararajan said.