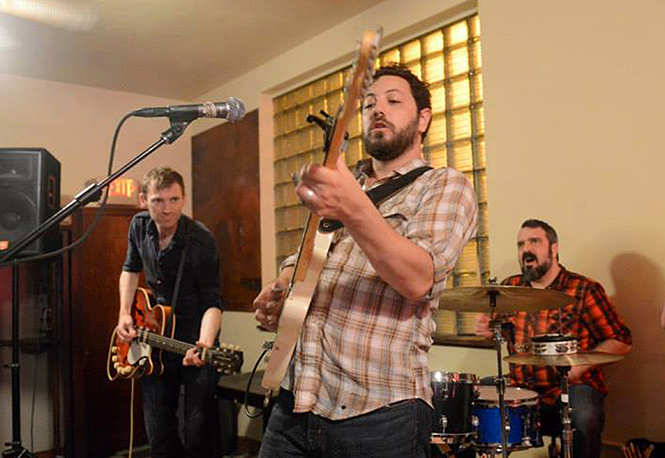 Roger Hoover and The Hurt

Roger Hoover and his band, The Hurt, have played at the Venice Café multiple times this past year, sharing their Americana songwriting and storytelling with a growing number of followers. He blends a mix of country, folk and blues with gospel and hymnal overtones.

Venice Café manager Patrick Hawkins said he enjoys listening to Hoover’s music and used to play with him back in the day.

“It warms the soul. Because it kind of has that little gospel feel but it’s like rock. I ain’t workin’ for the man no more,” he sang. “Kinda just like that. “He’s just a phenomenal songwriter and the band that backs him up is incredible,” he said. “I’ve known those guys for a long time and they’re really good players.”

Roger Hoover and The Hurt will be playing at Venice Café again April 26.

The term “musical kaleidoscope” has been used to describe The Burning River Ramblers, said Conor Standish, the band’s guitar and vocalist. He said that although it’s always tough to lock-down their genre, they identify with rock, blues, funk and a little alternative funk.

Standish said that what makes their music so diverse is the fact that each of the five band members likes different genres themselves, so their songwriting has a mix of influences.

“One song is called ‘Two Guns’ and that’s kind of folky,” he said. “Then another time we’ll go with really hard rock. I think that appeals to a wide range of people, old and young.”

The Burning River Ramblers have only played in Kent once, at The Venice Café last winter, but they’re looking for opportunities to come back soon.

Bassist Jim Garibaldi says Aliver Hall, an Akron-based band that came together in 2010, is “a mix of rock and an element of jam and dance. It’s all over the place.”

The group plays in Kent and enjoys doing shows at the Kent Stage. Even though the band has only been together for four years, all of the members have played in Kent with other groups.

One of Garibaldi’s other favorite venues is The Stone Tavern and he misses playing at The Robinhood. Garibaldi and guitar and vocalist Nick Reese agree that Kent is one of the best places that they play. Reese’s favorite song to perform is Aliver Hall’s hit “I Don’t Care” because of its dancey nature and upbeat tempo.

The group is currently working on a new album and will be in town again May 1 for a show at the Kent Stage with Ekoostik Hookah, Tropidelic and Drunken Sunday.