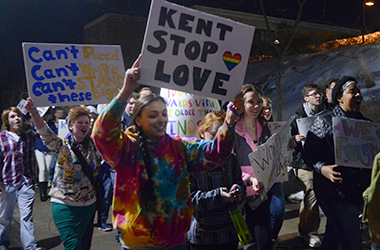 Kent State students concerned about an invasive university policy or procedure have a number of outlets on campus to voice their grievances, from holding peaceful demonstrations in Risman Plaza to marching on the Esplanade in solidarity with a particular cause or demand.

The university has loose guidelines and suggestions for how students and unaffiliated parties go about exercising their First Amendment rights, and while there are similar regulations to which off-campus protesters are subjected, the latter tend to be less conventional and more controversial.

Kent State Police Chief John Peach made it clear that although freedom of speech would be protected both on and off campus, university rules would be strictly enforced to ensure the safety of all involved.

Kent has seen a number of marches, sit-ins and pickets be dispersed because of unlawful or intrusive behavior, although that number is relatively small. Rallies usually stick to the code, according to Kent Police.

Oftentimes when a protest is dispersed off-campus, it’s because of obstruction of traffic, disorderly conduct, or menacing behavior, Lt. James Prusha of the Kent Police Department said.  Anything that involves making threats of imminent violence, impeding on the well-being of others or trespassing on private property is a legitimate legal justification for dispersing a public protest as well.

A spike in both disorderly conduct and menacing arrests in 2013 suggests growing dissent and more aggressive approaches among Kent residents.

Disorderly conduct is an umbrella term including fighting, excessive noise, using offensive or abusive language that is likely to incite violence, seriously obstructing traffic and hindering the movement of persons on a public street, according to the Ohio Revised Code.

Disorderly conduct is considered a minor misdemeanor punishable by a $150 fine in most cases. However, some situations call for an elevated charge of a fourth-degree misdemeanor with a potential sentence of 30 days in jail and a $250 fine. This circumstance is rare and usually occurs after a series of warnings.

“If someone is involved in disruptive behavior and a police officer orders them to stop and they continue that behavior, we would charge them with disorderly conduct after a warning, which is now a fourth degree misdemeanor,” Prusha said. “That becomes an arrestable offense — a minor misdemeanor, in most circumstances, is not something we’d arrest for.”

On campus, students are suggested to rally in high-trafficked, spacious areas such as in the plaza, in front of the M.A.C. Center, on the front campus lawn or Manchester Field. Students are given one-hour blocks of time for registering purposes. The ability to use sound amplification on campus, including loudspeakers and amplifiers, is restricted to student organizations and university departments. Even then, there are heavy restrictions for when and where sound amplification can be used, according to university policy.

Similarly, Kent Police Department officers use their discretion when deciding whether or not props used in protests are menacing. Usually, the use of sound amplification is for solicitation or promotional purposes during community events only. Anyone making excessive noise can be issued a citation.

There are few suggestions for where protesters are expected to gather, but many members of the police department suggested the sidewalk on Main or Summit streets. Anywhere that is considered public property and isn’t a nuisance is fair game. Prusha also suggested protesters work on the clarity of their message to ensure a successful demonstration.

“There have been some protests I’ve observed as a police officer and even when I was out there, I didn’t really know what it was they’re protesting,” he said. “They’re not real good at saying, ‘This is our position.’”

Prusha said the department prepares itself for incoming protests beforehand if they can. Oftentimes, well-known or outspoken organizations, such as the Westboro Baptist Church, will announce plans to organize, making it easier for the department to assemble in case of a clash.  If the protest remains civil, the department keeps its distance, but Prusha said when dealing with larger demonstrations, officers linger.

“If it’s some planned event, like we know protesters are coming to town and the location they intend to go, what we do totally hinges on their plans,” Prusha said.

May 4 never fails to produce a bit of commotion, he said. One experience with nearly 100 protesters who staged a sit-in in the middle of the road on the anniversary of the Kent State shooting stuck with him.

“There’s always people involved with some things regarding the shooting of Kent State students back in ’70,” Prusha said. “On the anniversary of that, you get people who come together. There’s been some times when they do some marching, and they’ve done a sit-in on West Main Street before.”

He said he was forced to make a handful of arrests as a result of non-compliance with police requests, in part, for public safety.

“Just because they’re breaking the law doesn’t mean they need to be run over by a car,” he said.

Emeritus sociology professor Jerry Lewis, is an expert in collective behavior among various other sociological disciplines. He said group mentality significantly differs from that of an individual. People tend to feel safe in groups, almost immune to repercussions because the blame is shared. He cited celebratory riots after national championships as an example. Behaviors such as tipping police cars and setting establishments ablaze are not typical individual behavior but are prevalent group behaviors.

“They just don’t follow the normal rules of behavior, you can stand up and call somebody a bad name and get away with it,” he said. “The crowd creates an atmosphere to get away with things they wouldn’t in everyday life.”

Officers are trained in composure when dealing with potentially dangerous situations, especially when attacks get personal.

Prusha said he’s had experiences when personal attacks during a protest or subsequent arrest have gone too far. During the aforementioned street sit-in, a few individuals refused to leave after several warnings.

One man resisted arrest and on the way to the police station started spitting while making threats about raping members of his family. Prusha said while he didn’t take the threats seriously, he needed backup for personal reasons.

“I get to the jail and I say to another police officer, ‘This guy’s really gotten under my skin. He fought with me out there, and now he’s screaming in my ear the whole way back, trying to spit through the police cage, so could you please get him out of the car? I’m afraid I’m gonna fly off the handle.”