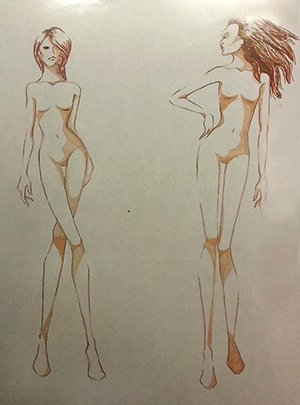 Jo-Ann Stores awards the scholarship annually to a first-generation college student in the Fashion School at Kent State.

“At Jo-Ann, one of the pillars of our corporate giving program is promoting opportunities in education,” said Tom Williams, executive vice president, store operations and human resources, in a released statement. “The Jo-Ann Stores First Generation Scholarship for Fashion Design and Merchandising was created to help students realize their dream of an education in fashion.”

DeSimone said that she has wanted to be a fashion designer since she was young because she loves clothing.

“I was always that little girl who would sneak into her mom’s closet and put on her clothes,” she said. “My grandmother knows a lot about Kent State and has pushed me to go to the Fashion School there ever since I can remember.”

DeSimone doesn’t know exactly what she wants to do with her degree but knows that she belongs in the industry.

“There are so many possibilities,” she said. “It would obviously be a dream to have my own line, but realistically I’d like to move down to Columbus and work at the corporate headquarters of Express or Victoria’s Secret.”

Applicants for the scholarship had to submit an essay about why they were applying and about what it means to be the first in their family to commit to a four-year degree.

“It means a lot to me to have the chance to do something that neither one of my parents did,” DeSimone said. “I have every opportunity in the world to be something great and do more in life than my parents got to do.”

Applicants were also asked about what it means to be a leader among their major.

“Recipients are selected based upon academic achievement and involvement in activities relating to fabrics, crafts or sewing,” the Jo-Ann Stores release said.

DeSimone said she was awarded the scholarship at the Jo-Ann quarterly town hall meeting at the Jo-Ann Fabric and Craft Stores corporate headquarters in Hudson in February.

“I met with Jo-Ann executives, the dean of the College of the Arts [John Crawford] and the director of the Fashion School [J.R. Campbell],” she said. “They presented me with the award on stage, and I made connections afterward.”

DeSimone said she was also given a new sewing machine, a pair of shears and fabric from Jo-Ann Stores.

“It was an amazing experience,” she said.