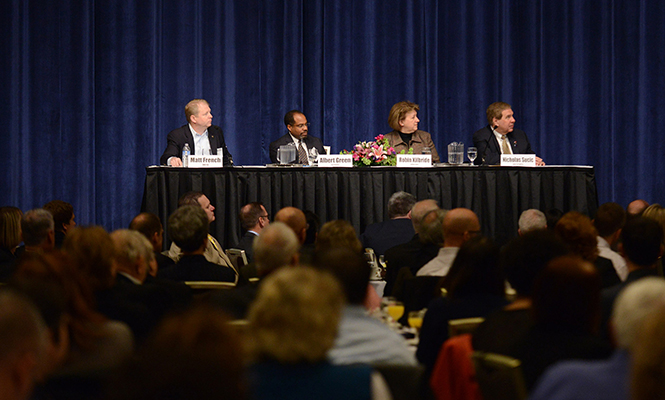 Kent State President Lester Lefton said the event was a reason to celebrate how far the city and university have come.

“It’s always amazing to stop and realize what an incredible transformation our community has experienced,” Lefton said. “The renaissance physically and emotionally has really brought our town and gown together in new ways.”

“There are lots of ways to measure corporate impact — jobs, profits, services, buying power, Ruller said. “Our downtown impact is measured in leadership. These leaders and their companies could be anywhere, but they chose Kent, Ruller said.”

“We don’t make a lot of products, but when you see how we touch your life every day, you’re going to be very impressed by the things that we do because you can’t get through a day without AMETEK touching your life several times,” French said.

AMETEK, French said, also has been in Kent for more than 100 years, has 90 employees working in downtown Kent, has employees on the boards of local charities and has sponsored the first home football game every year.

Green said Kent Displays makes a line of products called the Boogie Boards, which automate the process of writing on paper just like other electronics have automated many ways of life.

Kent Displays products are sold in 31 countries and a variety of stores in the U.S., but the business calls Kent home and Green said he is a Kent resident. Also, a lot of the company’s electronics work relates to work done at Kent State’s Liquid Crystal Institute.

“Folks there, in the liquid crystal business, have never heard of Cleveland, they’ve never heard of Ohio or Akron, but they know Kent,” Green said. “And the reason why they do is really because of the Liquid Crystal Institute. I think that a lot of people … don’t realize that, really, in their backyard is a world-class institute, the Liquid Crystal Institute, that is really known around the globe.”

Kilbride said Smithers-Oasis, which makes floral-arrangement products, just came back to Kent after moving corporate operations out of the city 21 years ago.

“We were able to move our corporate offices back to Kent six months ago,” Kilbride said. “We were thrilled with all the revitalization and development that’s taken place in the city of Kent, so we felt with all that’s going on that we really needed to be a part of that.”

Smithers-Oasis was founded in Kent 54 years ago, Kilbride said, when V.L. Smithers invented a product called floral foam that is used in temperature-controlled medications and food, gel pens and ice packs. It also is used in floral-arrangement products such as containers, wire and packets that make flowers live longer.

“We don’t do the flowers, but we sell thousands of products that florists and flower arrangers use to create a beautiful memory,” she said.

Sucic said Davey Tree Expert Company, which “provides a variety of tree care, ground maintenance and consulting service for the residential, utility, commercial and government markets,” has expanded in Kent since its founding in 1909.

“The company grew from a handful of tree crews into one of the largest tree-care companies in North America, but we kept our headquarters here in Kent,” Sucic said.

Sucic said he brings a 50-year perspective to town-gown relations after visiting Kent State as a sophomore in high school, and he said “the relationship between the city [and the university] has never been better.”

When the panel took questions from the audience, vice president of finance Gregg Floyd asked panelists what they would like to see in Kent that is not there now. All four agreed that Kent has come a long way, but several panelists pointed out needing more music, arts and festivals downtown, and French suggested building a facility downtown for concerts and local sports.

Green, Sucic and French also the view driving on Route 43 into Kent is not very appealing and needs a more welcoming entrance.

“You know, I think that they should plant trees there,” Green said, laughing.