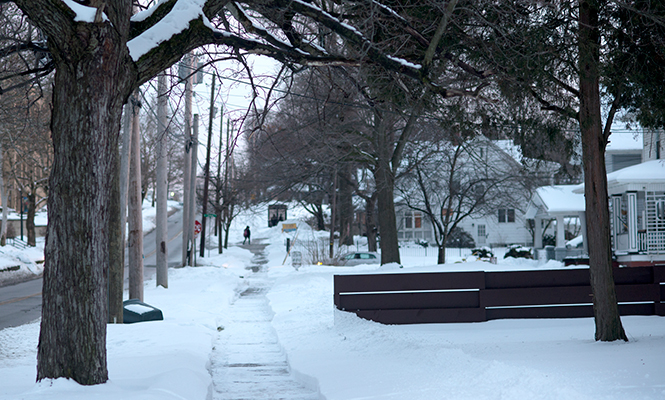 Due to an extreme winter, the city of Kent has been experiencing a shortage of salt used to keep the roads and sidewalks clear of ice.

Two months of polar vortices interspersed with seemingly unending snowstorms have taxed the United States’ cold weather resources, causing a sweeping salt shortage across the nation. As snowstorms continue into March, the city of Kent has successfully rationed its salt supply, although the Kent campus has nearly exhausted its.

As a result, Kent successfully stretched its annual 4,200-ton salt order through the unusually snowy winter. Shanley said the city’s salt supply dipped to 700 tons at its lowest, still enough to see the city through four large snow storms.

Shanley said although last weekend’s snowstorm was not as severe as anticipated, the city treated it with the same discretion exercised during heavier snowfall.

“We went out and we salted the mains, the secondaries and the intersections and the hills and the bridges, just like we normally would,” he said. “Where the rationing came into place is during the major snow event, we weren’t putting salt down early, we were basically plowing and plowing and plowing until the storm ended, then we started salting and cleaning up.”

But Kent State is struggling to make its salt supply last the winter. Jeff Mori, University Facilities Management’s assistant director of structures, custodial services and grounds, said, the campus is down to its last 120 tons of salt, just enough for one more snow storm.

“I would say we’re at 50 percent of what we would really like to be at, what we’re comfortable being at,” Mori said. “Normally, at this time of the year, we wouldn’t be as concerned, but based on the weather pattern, you know, it’s all over the map this year.”

Mori said campus snow-removal crews are trying to spread the salt as efficiently as possible and are using more man power to compensate for the lack of salt.

Although Kent State has 400 more tons of salt on order, Mori said salt distributors are struggling to meet demands this winter, and he doesn’t expect another shipment for about two weeks.

Mori said although campus salt reserves are low, the safety of Kent’s students and faculty remains a top priority in the event of a snowstorm.

“We’re really cracking down on how much salt we’re letting our people use, trying to be more efficient and more effective,” Mori said. “We are always evaluating how that is affecting campus safety and travel. We don’t want to affect that at all. And if we did get hit with another major snowstorm, I do not believe the campus would be at risk.”