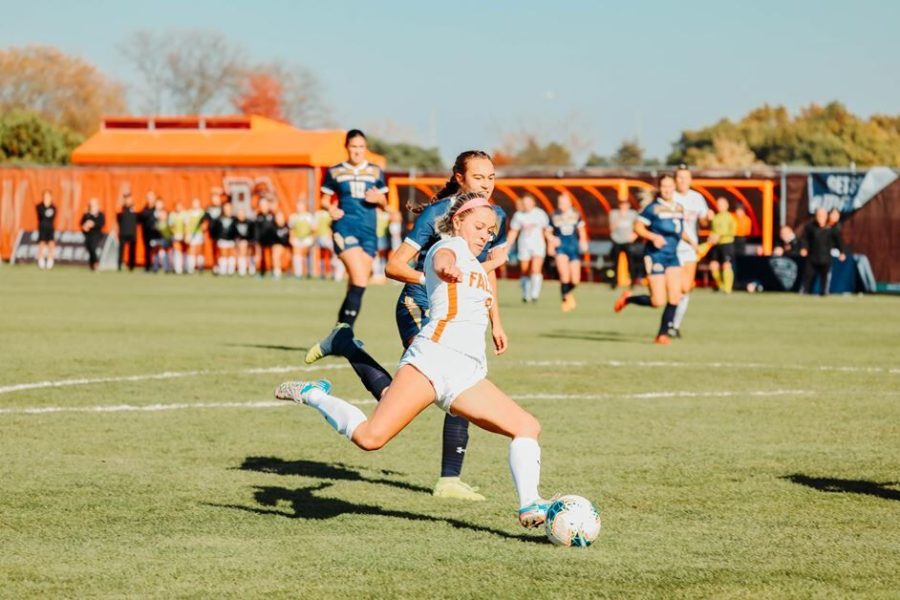 Kent State’s soccer season started back in August, when Mid-American Conference coaches picked the Flashes to finish ninth in the league.

It ended Sunday, when the Flashes fell 3-0 to Bowling Green in the MAC championship game.

In between, KSU posted a 13-4-3 record, its second-most wins in a season in school history. The Flashes reached their first conference championship game since 2016 and scored 44 goals, the most ever in a season.

But Sunday, Kent State couldn’t get its offense going at all. Bowling Green scored six minutes into the game, then twice in the second half. KSU managed only seven shots, five on goal. But none of them seriously threatened.

It was Bowling Green’s fourth consecutive MAC tournament championship and sends them into the NCAA tournament. BG’s opponent will be announced Monday.

“Obviously, we’re very disappointed,” coach Rob Marinaro said. “We didn’t get the start that we wanted. This is a team that you can’t really fall behind. They stifled our offense today, and they did a great job.”

But Marinaro said it was a season to be proud of.

“I’m really proud of this team, and the fight they showed this season,” Marinaro said. “Unfortunately, we fell one short. I’m super proud of the way this team represented Kent State soccer, the athletic department, and the university. All year they fought and were resilient. It’s something they should be very, very proud of.”

“We were ranked at the bottom,” redshirt senior forward Cameron Shedenhelm said. “We surprised everybody, but we didn’t surprise ourselves. We knew exactly what we could do this year. We played a good team, and we played good teams all year. We pulled through all the games, and I just think that it’s a learning experience for everyone.”

“This season meant a lot to the seniors. We’re super grateful for the coaches, our training staff, and everyone. It was a really good season for us, and I think everyone was really happy.”

“It was the best season that I could have possibly come back to and end on. I couldn’t have asked for a better team or a better group of girls who would just fight as hard as they can for the whole season.”

Shedenhelm lead the MAC in goals with 12 and points with 30. She finishes her career as the fifth all-time scorer at Kent State with 24 goals.

Redshirt senior forward Karly Hellstrom lead the MAC in assists with 11 and was third in points with 25. She tied for fifth all-time in career assists.

“The seniors were here, some even for five years, and they gave their heart and soul to the program,” Marinaro said. “It hurts even more for them that they fell one short. Amazing careers, wonderful young ladies, and it’s going to be sad to see them go. They left a legacy here, and they did wonderful things.”

The Flashes have a lot of young talent returning, Marinaro said.

“The rest of the team is still quite young,” Marinaro said. “We’re really excited for the future and to see what it holds for us. We’ll just continue to build up what we started this year.”

Cole Oswald is a reporter. Contact him at [email protected]