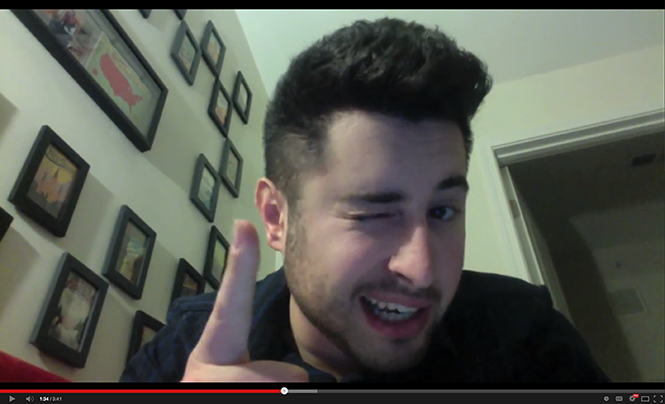 Stage fright: it’s the nervousness felt by a performer or speaker before appearing in front of an audience.

For Hannah Raulston, it’s the reason she got involved in vlogging on YouTube.

“I was just unable to feel comfortable performing on stage or even in front of large groups of friends,” said Raulston, a sophomore electronic media production major. “That’s why YouTube was the perfect platform for my passion for acting: because I could still reach a large audience without having to be in front of one.”

Raulston manages two YouTube channels: her personal one, HannahSeries, and an international collaborative channel called WorldWideWitteos. Both channels follow a vlog format, and have presented rewarding experiences for Raulston.

“I actually got featured on Nickelodeon,” Raulston said. “They found one of my older videos where I balanced a chair on my face, contacted me, then I signed over some paperwork and I was on TV.”

Among these experiences, she has also had the opportunity to meet other YouTubers, like senior managerial marketing major Michael Fisher.

“One of the most rewarding experiences has been overcoming the fear of speaking in front of a camera,” Fisher said. “When you’re filming, you can just relax and be yourself, and edit out all the bad parts later.”

However, there are also some challenges when it comes to putting videos out there.

“Putting aside time is a challenge,” said freshman integrated health studies major Michaela Kreidler. “It takes hours to edit, record and just put your ideas together and put it all out there. It’s very time consuming.”

“People know more about you than you know about them,” Raulston said.

“I’ve had people come up and recognize me, and completely know everything about my personality because they have four years of me being myself to learn about who I am, whereas I have nothing to go off of.”

At the end of the day, however, it’s all about being yourself.

“Just literally be yourself and do whatever you want to do on your channel,” Fisher said. “Just have a good time with it, and be yourself.”