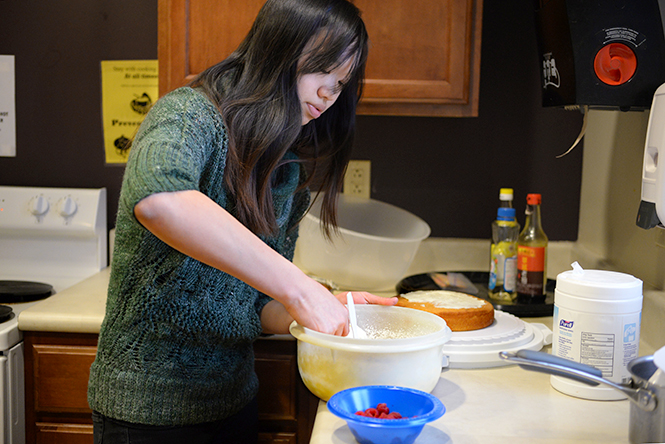 Jessica Becker, freshman English as a second language major, helps to decorate a cake she and her friends baked in the Stopher Hall kitchen, Wednesday, March 12, 2014.

As the morning sun rises, the fourth floor of Centennial Court E is filled with the aroma of a delicious breakfast; sophomore Bret Frost begins to eat, not with food already prepared that he bought with his meal plan money, but rather with fresh ingredients he gathered to cook for himself.

Frost, a sophomore exercise science major, is one college student who takes advantage of the resource he and other residents living in a residence hall can use — a campus kitchen.

“I love eating five eggs with a whole wheat bagel and spinach with Frank’s RedHot sauce,” Frost said about one of his favorite meals that he enjoys cooking on campus.

Frost said he uses the campus kitchen in his residence hall about four times a week, cooking anything from eggs to rice and vegetables to tofu curry dishes.

“[Residence hall kitchens] are nice especially for people with limited meal plans,” Caine-Bish said. “I also think on the weekends when your timing may be a little different than when food may be available to you or if your schedule is strange and you need food availabilities at different times — and also because you can buy groceries on campus, it allows you to prepare those meals.”

Frost said he also enjoys cooking in residence hall kitchens because, “It’s a good switch-up from always eating at the Hub or Prentice or wherever you go, and it’s good practice for whenever you live in an apartment [after moving out of the residence hall] because you’re going to be cooking your own meals.”

“You can cook pretty quick, you’re not waiting around, and it’s convenient,” he said because the kitchen is right on his floor.

He also said the kitchens are great because he meets people who are always seeing what he’s cooking.

Every Monday, the girls and a few others involved in the campus organization H20 gather at 8:15 p.m. in the kitchen to bake brownies and cookies.

“We take [the treats] every week to the same floor to build relationships with those people and get to know them better and just to have people meet together,” Wellman said.

In addition to baking with the group, the girls also use the kitchen to cook dinners with their friends who might not have kitchens in their residence halls.

“We’ve actually had about two international dinners in the kitchen which is odd for college students to organize on our own, but we like to invite conversation partners and foreign students that we know of, and we’ll fix something American or something they like and just eat dinner together,” Wellman said. “It’s really nice. Most of them don’t live off campus and some live in different halls.”

Aside from cooking, Wellman and Augustine said they agree that cooking in the residence halls can also be a community and friendship builder because people are always passing by asking what they’re making.

Augustine also said she enjoys using the residence hall kitchens to switch up her meal options. She said the food on campus can get old at times and using the kitchens is a good way to make homemade food on a weeknight or weekend. She said she likes that you can taste the difference between a campus meal and a home-cooked one.

Some students might not be aware of the full potential residence halls kitchens have. “I feel like some people just don’t wanna spend time to do it.” Augustine said.

“They’d rather microwave this or say ‘I’m just gonna run to Prentice and get a wrap’ because it’s obviously going to take longer to cook something, but even if you just cook pasta it doesn’t take that long,” she said.

Alexandria Kobryn, a freshman exploratory major said she doesn’t normally use the kitchens because she feels she needs to eat out in order to use her meal plan. She said she would like to use the kitchens more though if she bought ingredients on campus to cook foods such as spaghetti and meatballs one night for dinner.

As for freshman nutrition major, Kathryn Rosinski, she has only used the kitchen twice for baking purposes. She said she realizes cooking homemade in the residence halls kitchens is probably healthier than eating on-campus food all the time.

“It’s healthier than always having to go to the Hub,” Rosinski said. “You could probably cook something better for you, maybe some whole grain food.”

Roskinski said she would like to start using the residence halls kitchens more often so she could prepare healthier food for herself.

“I would like to make whole grain foods, panini’s on occasion, mac and cheese for fun, make pizza with friends — probably anything that you can do to make a big meal for everybody.”