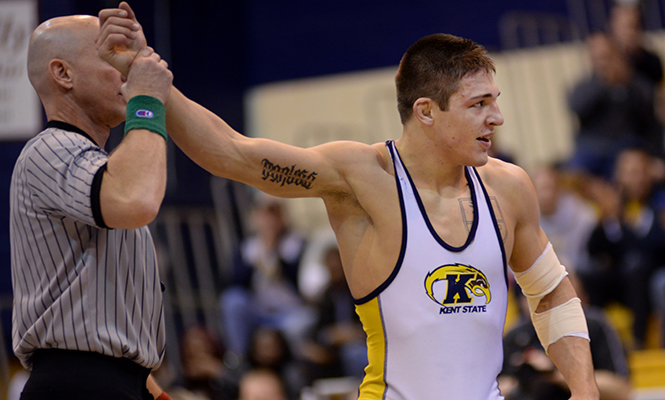 Kent State's Ian Miller celebrates as he wins his final match of the MAC Championship Sunday, March 9, 2014. Miller defeated his opponent from Central Michigan and finished first in his weight class winning him a Mid-American Conference title.

Fourth-seeded Miller opened the tournament with three decisive victories and headed into the semifinals matched against ninth-seeded Dylan Ness of Minnesota.

Tied with Ness to start the third period of the match, Miller earned an escape to earn a 4-3 lead. That lead lasted only a few moments before Ness earned a takedown on Miller, finishing the period with a 6-4 upset over Miller.

The loss sent Miller into the consolation semifinal to face last year’s 157-pound champion, Iowa’s Derek St. John. Miller won on a score of 14-9, the second most points allowed by St. John all season.

The battle for third place featured a matchup Kent State head coach Jim Andrassy said earlier in the week could have been the “highlight of the entire tournament” if it was to take place.

“He really mixed it up,” Andrassay said in an interview with Kentstatesports.com. “When he gets guys to come at him to hit all those different types of moves. Any time you get an Iowa guy out there, everybody’s going to be watching. He was really explosive and took some fancy shots that created a lot of excitement for the fans.”

Although Miller had twice beaten Nebraska’s James Green twice during their high school careers, Green took third place with a vengeful 13-1 victory. The loss put Miller on the podium in the fourth place spot as an All-American.

Miller was the sixth All-American from Kent State in as many years. Miller finished his sophomore year with a 31-6 record.

Sophomore 149-pounder Mike DePalma went 2-2 in the tournament. His wins came in the wrestleback bracket after being pinned by Eric Grajales of Michigan, an opponent DePalma beat earlier this season. The second of DePalma’s victories in the tournament was over No. 7 seed Gus Sako of Virginia.

Sophomore 133-pounder Mack McGuire and junior 174-pounder Caleb Marsh were eliminated from the tournament after they both started with consecutive losses.

The team now will begin its offseason that will be highlighted by Kent State wrestling camps.

The camps will span over most of late June and early July, allowing up-and-coming wrestlers to have sessions with the Kent State coaching staff.