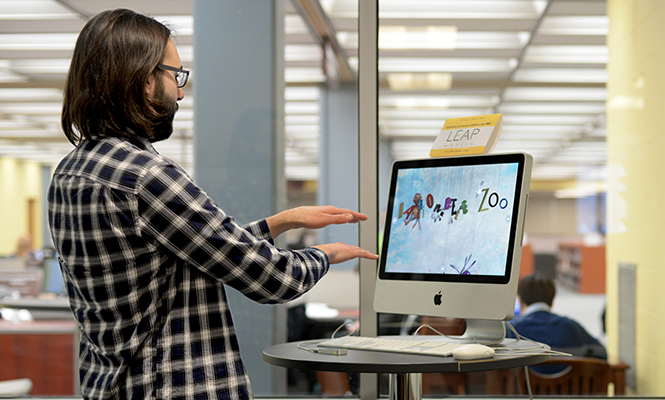 Josh Boord, junior philosophy major and library SMS consultant, demonstrates how to use the new Leap Motion Controller in the multimedia studio of the University Library Sunday, March 16, 2014.

Kent State’s Student Multimedia Studio, located on the first floor of the library, is looking to become more interactive with their addition of a Leap Motion Controller.

Hilary Kennedy, manager of the Student Multimedia Studio, said the controller is based on movements of the hand.

“The Leap Motion Controller is a gesture-based device,” she said.  “It can recognize the intricate movements and gestures in the five fingers of each hand, so you control what happens on the computer screen just by moving your hand.”

Kennedy said the controller comes with applications and programs that are both fun and educational.

“There’s this anatomy kind of app that comes with a skull, and you can actually point at the different parts of the skull and the names will appear on the screen,” she said. “It actually shows you how to rotate the skull by moving your hand or by pointing at it and peeling off by disassembling and reassembling it.”

Kennedy said the studio purchased the controller a year ago and brought it to the studio after searching for more interactive options.

“We were looking for a new technology to introduce to the lab, and we thought this could be something that students could explore,” she said.

Sophomore journalism major Lauren Blue works for the studio and said the Leap Motion Controller can be utilized for projects outside of the Student Multimedia Studio as well.

“You can connect the Leap Motion Controller to your own personal Mac computer and scroll through web pages with your fingers at home,” Blue said. “There’s an app on there that allows you to make a slideshow, which I think is good because you won’t have to worry about clickers not working or PowerPoint timing — just swipe your fingers.”

Blue and Kennedy both said students have responded positively to the Leap Motion Controller, especially after the device’s showcase during Student Appreciation Day at the University Library on March 10.

“Students have had a lot of fun with it, I think,” Blue said. “They’ve asked questions and have been really into it.”

“I never even knew something like this existed,” Emge said. “It’s really cool, and it just felt as if I were playing a video game.”