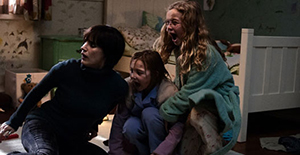 The future masters of horror, people like Ti West and James Wan, the director of “Insidious” and “The Conjuring,” have a gift for finding great horror scripts and bringing them to life with blood curdling, creepy horror glory. Of the truly terrifying horror movies of the last few years, a list which includes great films like “Sinister,” “Insidious: Chapter 2” and “Cabin in the Woods,” not many are as spooky as the Guillermo Del Toro produced film, “Mama.”

Jessica Chastain and Nikolaj Coster-Waldau of “Game of Thrones,” play a couple who take in their nieces. The girls had been living in a dilapidated house in the woods and raised by an unseen entity they only refer to as Mama.

The sisters are creepy enough on their own, walking on all fours and looking like feral animals. Once they do become domesticated, Mama shows up to give Chastain the boot and take over again. Chastain plays a tatted bad girl who is reluctant to settle down and raise the kids, and plays the part phenomenally — jet-black hair and all.

A largely unnoticed film, “Mama” is one of the scariest films in recent memory, with top-notch special effects and an excellent cast.

It’s tough to find a film that can pull off scary and serious without seeming too cliché, but “Mama” recycles some classic themes of horror cinema nicely. Fans of supernatural tales will enjoy the originality while sitting on the edge of their seats.