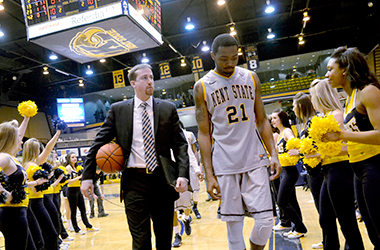 Khaliq Spicer exits the court after last week's regular season game against Miami University, March 4, 2014. The Flashes took on Miami again at the first and only tournament game they'll see this season, losing 71-64 to the Redhawks in Miami, Monday, March 10, 2014.

Welcome to the land of one and done.

Kent State men’s basketball team (16-16, 7-12 MAC) dealt with a win-or-go-home situation Monday night as the Flashes took on a familiar face in the form of the Miami Redhawks (13-17, 9-10 MAC) in the first round of the MAC Tournament inside Millett Hall.

The Redhawks rattled Kent State in the second half of Monday night’s contest and built up a 13-point lead on the Flashes. The Flashes managed to battle back from behind and chip away the Redhawks’ lead to two points thanks to a couple of three-pointers from junior guard Devareaux Manley and clutch plays by junior guard Kris Brewer, who just recently received an All-MAC Honorable Mention, but the team ran out of time.

Miami, who went 13-of-18 on free throws and struggled from the foul line early on in the first half, made its free throws down the stretch when they really mattered and sank its final six free throws of the ball game to put away Kent State 71-64 and advance to the second round of the MAC tournament.

Kent State head coach Rob Senderoff said in a post-game radio interview that he took full responsibility for his team’s shortcomings this season but still expressed his thoughts about how disappointing this 2013-2014 season was to the team after the game.

Kent State finished the season with a .500 overall record after starting the non-MAC portion of the season 8-1.

“I told everybody in that room that this year was not acceptable, just the way the season went down, not acceptable,” Senderoff said. “Our leadership this season wasn’t what it needed to be, and we were certainly not tough enough physically for sure.”

The first half of Monday night’s clash was about as evenly matched as it could get.

The Flashes and Redhawks went tit for tat in a first-round slugfest as much of the teams’ statistics looked virtually identical in the first 20 minutes of Monday night’s game.

Once Kent State began to use the full-court press near the end of the half to pressure Miami’s inbound passes, the Redhawks began to lose the handle on the ball as the Flashes forced more and more turnovers as the half transpired. Miami began to have a difficult time getting the ball across the timeline in time.

After Kent State gave up the three-point play to Rollins, Brewer tried to send the Flashes into the locker room on a positive note by closing out the half in dramatic fashion with a 3-point buzzer beater.

After receiving the swift inbounds pass, Brewer turned and burned, quickly crossing the timeline and fired a long three from just above the half-court mark. He drained the shot to reclaim Kent State’s lead, 34-33, at half.

However, after the first half, the referees ruled that Brewer still had his fingertips on the ball when he let it go, so the buzzer beater ultimately did not count, and Miami carried its 31-33 lead into the half after all.

The second half was scoreless in opening two plus minutes until the Redhawks ended the drought with a putback layup tipped in by sophomore guard Quinten Rollins.

Kent State started the second half much like they did against Akron this past Friday and allowed Miami to go on a 17-6 run in the opening eight minutes of the half.

The Redhawks shook up its strategy in the second half and took it to Kent State defensively, pressuring Kent State’s offense with half-court traps and full-court presses of their own, not allowing the Flashes generate any offense.

As the Flashes struggled with turnovers, Miami continued piling the points on with backdoor moves and screen passes with which Kent State just couldn’t seem to keep up.

Sophomore guard Willie Moore of Miami proved to be the man to beat in the second half as he posted 13 points on 5-of-nine shooting from the field and a 2-for-2 shooting from three-point range.

Despite a late second-half push from the Flashes, the Redhawks held on to win. They will move on in the tournament to face Ohio Wednesday at 6:30 p.m. inside the Quicken Loans Arena.

As for the Flashes, Senderoff and the coaching staff will try to look past this season and focus on regrouping and making preparations for next season.

“This season was difficult for our staff, our players, and I’m sure for the fans,” Senderoff said. “I will do everything in my power to make sure we don’t have a season like this again.”

“I thanked [them] for all their work,” Senderoff said. “I know that Darren took a ton of criticism because he didn’t have a great season, but he’s a phenomenal kid, and the same goes for Mark.”