Gymnasts get set for NCAA Regionals 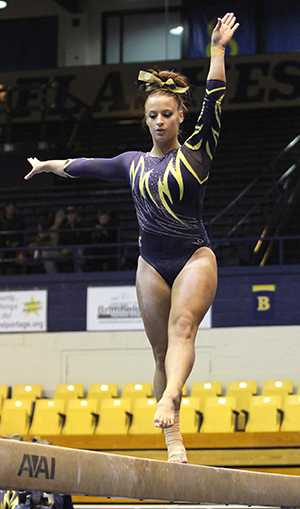 Kent State senior Marie Case prepares for an acrobatic move during her balance beam routine against BGSU March 6, 2014. Kent State won its last home meet of the season with a final score of 196.225.

On the wings of a regular season conference championship and a second-place team finish in the Mid-American Conference Championships, the Kent State gymnastics team will head to Louisiana this Friday to compete in the NCAA Baton Rouge Regional.

The 15-5 Flashes, ranked 27th nationally, are seeded fifth in a field that includes LSU, Stanford, Auburn, Arizona and Iowa State.

“We are really excited to go to Baton Rouge with the great location and gymnastics fan base down there,” head coach Brice Biggin said in an interview with Kentstatesports.com. “It is going to be a situation that we need to go out there and do our best to get either the team or someone to advance on.”

The Flashes will be competing for the opportunity to continue on to the NCAA Championships in Birmingham, Alabama on April 18, either as a team or as individuals.

Senior Marie Case will look to lead the Flashes coming off a dominating performance in the MAC Championships. Case finished first in the All-Around competition for the second straight year after accumulating a score of 39.500. Case also finished first in the balance beam and vault, second in the uneven bars and third in the floor exercise.