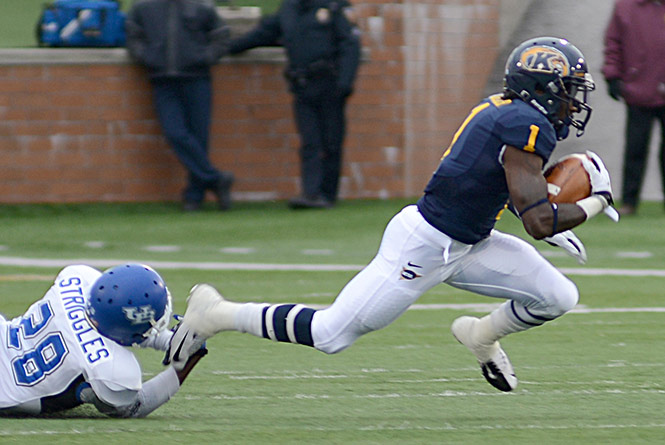 Kent State's former running back Dri Archer runs the ball at a game against Buffalo at Dix Stadium, Saturday, Oct. 26, 2013. At the NFL combine, Archer recently posted at 4.26 seconds in the 40-yard dash, marking the fastest time this year, and second fastest in the combine since 1999.

As an undersized “slash” player from a non-BCS conference, it might have been easy for those unfamiliar with Dri Archer to overlook him going into this weekend’s NFL Draft Combine. But with one quick burst of electrifying speed, the former Kent State receiver and running back has the whole league talking.

The former high school track star posted a 4.26 second 40-yard dash, the fastest time this year and the second-fastest dash at the combine since 1999. He was unable to break Chris Johnson’s all-time record of 4.24 as he had earlier predicted, but Archer firmly established himself as the fastest player in this year’s draft pool.

Archer is slated as this year’s ninth-best running back by ESPN draft guru Mel Kiper Jr., and projects to be a mid-round draft pick.

The dynamic playmaker amassed 4,972 total yards during his career at Kent State, making significant contributions rushing, receiving and fielding kicks. An early ankle injury plagued his senior campaign, but in 2012, Archer was an All-American, rushing for 1,429 yards at nine yards a carry and tallying 23 total touchdowns.