Kent has no plans to move fraternity houses 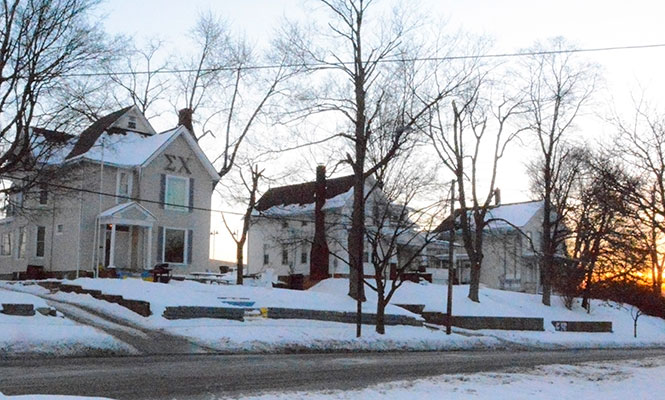 The fraternity houses, such as those that line East Main Street near downtown Kent, will not be forced to relocate to Fraternity Circle.

For months, rumors have circulated around campus that the city of Kent would be asking the fraternity houses, located near downtown Kent, to relocate to Fraternity Circle, located behind the Rec Center. That rumor is false, according to both the city and the leaders of several Greek organizations.

“The City of Kent does not have any legislative authority that would allow for the permanent relocation of occupants from any house or business anywhere in the city,” Kent Community Development Director Bridget Strussel said. “I have heard anecdotal comments, over the years, referencing the possibility of identifying a strategy that could facilitate the geographic focusing of housing options for Greek organizations, but to my knowledge, steps towards the development of such a strategy have not been implemented.”

Interfraternity Council President Joshua Cherok says that there’s no way that the city could force the fraternities to move.

“There’s been no talk, it is just a rumor. If that was going to happen you’d face a lot of issues between national headquarters of fraternities and the city,” he said. “The initial reaction would be absolute chaos throughout the city, throughout Kent State and throughout fraternities. It’d be very chaotic and you’d have a lot of people upset with the city.”

Pi Kappa Alpha President Ryan Cowin said that it would be unfair for Kent to implement the idea of moving the houses.

“I don’t know how that would work because I don’t know who would pay for all of it,” he said. “If the fraternities can’t handle it then they’re going to be in a bad situation. These fraternities aren’t made of money, they’re small at this school, and it’s tough. When you have 30 guys in your chapter, how are you going to be able to raise money to build a house? That literally makes no sense. If you don’t have a good alumni base, too, how do you do it?”

Cherok says that the people who would want to move the houses don’t know much about Greek life and just see stereotypes.

“They don’t notice the good things we do for the community like the raising money for charities and all of the community service we do,” he said.

“They think of partying, trash and all of the events that go on at the houses but don’t see any of the great things we’re doing. It’s a way to please other people around the city, and it’s a way for Kent to continue modernizing the downtown area.”