Woman hit by car at intersection near Satterfield Hall 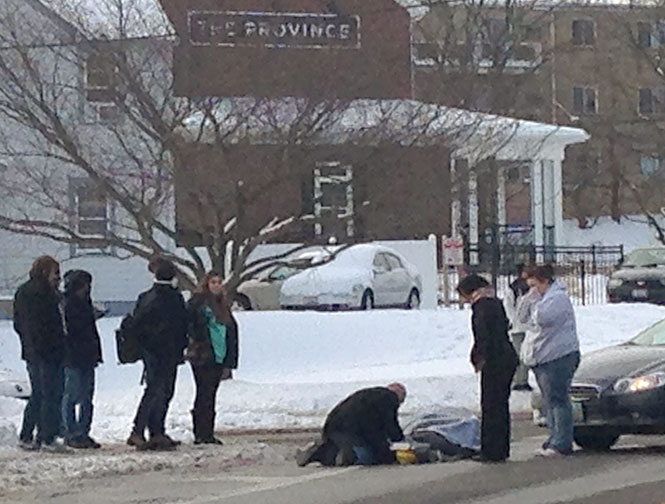 A pedestrian offers assistance after a woman was hit by a vehicle turning from Janik Drive on to Summit, striking her at the corner of Morris Road and Summit Street, around 4 p.m., Tuesday, Feb. 11, 2014.

A Kent State student was released with minor injuries from Robinson Memorial Hospital in Ravenna Tuesday night after being hit by a car at the intersection of Morris Road and East Summit Street Tuesday afternoon.

Senior business management major Kristen O’Brien was hit by a Chrysler Concorde walking to her class in the Business Administration building. Amanda Taylor, 22, of Ashtabula hit O’Brien as she attempted to make a left turn onto East Summit Street from Janik Drive, according to Kent Police reports.

O’Brien, 22, said she escaped the accident with a swollen wrist, neck pain and bruises on the left side of her body. Taylor was charged with failing to yield to a pedestrian in a crosswalk.

“I feel like it was just a freak accident,” said O’Brien, who crosses the intersection every day for her classes in the business building. “I don’t feel like it happens a lot.”

Police reports confirmed that the Kent Fire Department responded first to the accident.

Kent State students who saw the accident Tuesday said O’Brien put on a stretcher and transported by an ambulance to the hospital.

Freshman aeronautics major Jordan Dane and his roommates saw the accident and heard police sirens from their home next to The Province apartments on East Summit Street.

“We looked out the window and saw two cop cars and a girl on the ground covered in a sheet with her head up,” he said. “They put her in the back of the ambulance, but I didn’t see any blood on her.”

Dane said traffic slowed at the intersection for 20 minutes.

O’Brien advises students to be careful when crossing the intersection.

“Be extra cautious because some people don’t pay attention when they’re driving,” she said.