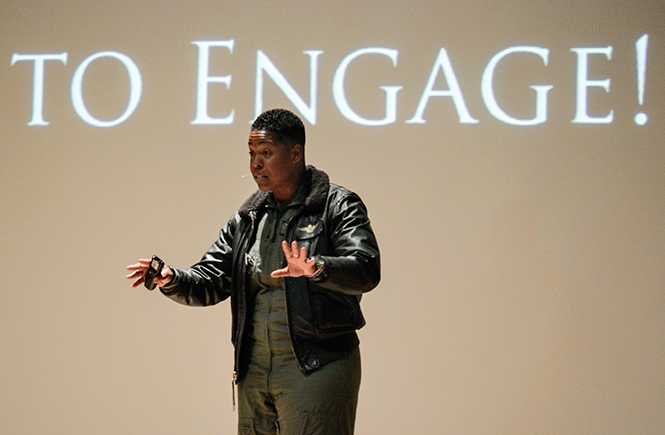 The first African-American female combat pilot in American history came to Kent State Thursday night to talk about her experiences in the U.S. Marines.

Vernice “Fly Girl” Armour said since her experience as a pilot with the Marines, she has become an author and motivational speaker, speaking all over the country. She said she joined the Marines after spending a nine-day trip with the women’s ROTC program during her time at Middle Tennessee University.

“When I was in college, I saw a flyer to spend nine days in New Orleans during Mardi Gras,” Armour said. “It ended up being nine days of marching in the heat, which isn’t my idea of a party.”

Armour said soon after joining ROTC at MTSU, she decided to enlist in the Marines, but a picture inspired her to pursue a career as a pilot.

“I saw a poster of a black woman in a pilot’s uniform and thought, ‘That is so cool,’” Armour said. “I didn’t know her name or who she was, but because of those five minutes, I am here in this room sharing this same breath.”

Armour said she faced many challenges during her time in combat as an African-American woman but said she thinks every demographic has its own unique challenges.

“I never knew how to be anything else,” Armour said. “Every demographic that I’m apart of has its different share of issues. We definitely still have a long way to go.”

Roslynn Porch, a senior communication studies major and president of Black United Students, helped organize the event and said that she thought Armour was a great fit for Kent State.

“My biggest expectation was for her to talk about her background and she definitely did that,” Wilson said. “I like that she also incorporated the lessons she learned to hopefully help people like us.”

“I thought it was a phenomenal, beautiful event,” Whipple said. “I’m already contemplating my next moves.”

Armour said she hopes that the students use her speech as a platform to follow their dreams no matter what obstacles come their way.

“Whether you’re a freshman, senior, faculty member or someone’s parent, everyone sitting here has a purpose in life,” Armour said. “You have to be willing to go for it because the universe is waiting for you to show up.”

To find out more about Vernice “Fly Girl” Armour, visit her website, vernicearmour.com.