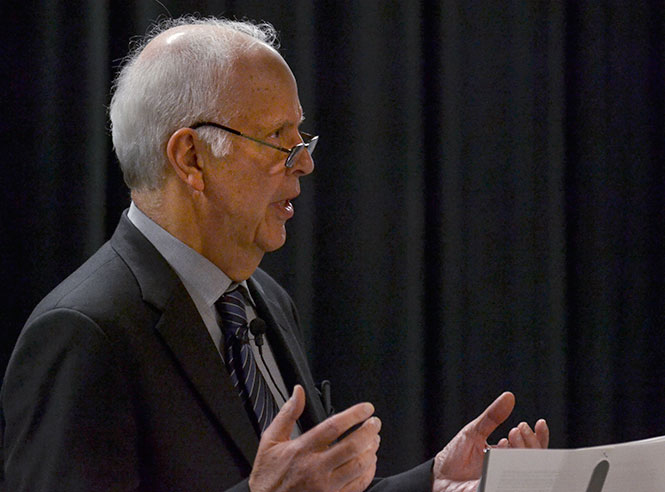 “American democracy, is it dead, or alive?” Palmer asked at the beginning of his lecture.

The question comes from an old folk tale about a bird being dead or alive, Palmer said.  He connected it with American democracy, explaining, “It’s in your hands, it’s in my hands and it’s in our hands.”

Palmer, whose lecture was based on his latest book, “Healing the Heart of Democracy: The Courage to Create a Politics Worthy of the Human Spirit,” said he wants people to realize the importance of being in the  right relationships.

“It’s more important to be in right relationships than being right,” Palmer said.

“In the context of solving the problems we have in our divided society…it doesn’t mean that questions being right or wrong aren’t important, but to be in a right relationship creates that container that can hold that ongoing conversation.”

“I’m somewhat familiar with his stuff from reading him previously, but it was very nice to hear his talents of storytelling,” Boccicchil said. “I think the take home point for me was that is important to listen, and important for the listener to grow.  I think those two things create a space for change.”

The lecture was a part of the Kent State Spring 2014 Guest of Honor Lecture Series.  The event was sponsored by the Office of the Provost and coordinated by the Honors College.