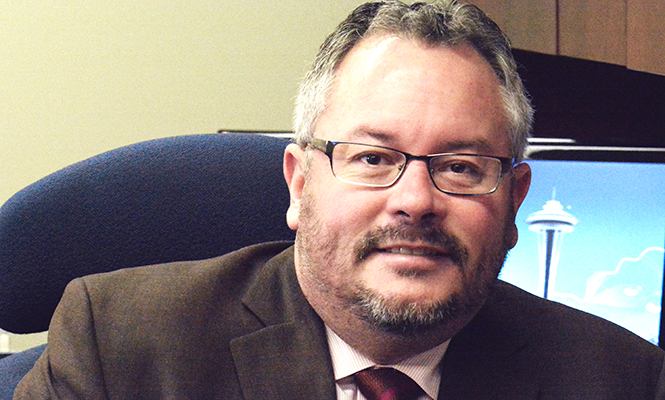 Steve Sokany is a board member and planner of Kent's State's participation in the Gay Games. The Gay Games are a popular annual event that is taking place in Cleveland Aug. 9-16.

Kent State is partnering with the Cleveland Foundation and the Gay Games to provide internship and volunteer opportunities for students this summer.

Stephen Sokany, senior associate vice president of institutional advancement, is the co-chair for Gay Games 9 and is working with fellow board members of the Gay Games to increase Kent State’s involvement in the Gay Games. He said the board is looking for 3,500 to 4,000 volunteers to help orchestrate events Aug. 9 to Aug. 16.

“We have a volunteer services coordinator who is visiting campus to interview students for internship opportunities that will expand across majors such as hospitality management, sports administration, communications, public relations and business,” Sokany said.

With the Gay Games taking place in Cleveland, Sokany believes that as a campus, Kent State has the chance to take part in history by participating in a world-renowned event.

“The Gay Games is the largest amateur sporting event in the world in 2014, and we are expecting thousands of participants”,Sokany said. “We have registrants from 28 countries and 48 states with 35 different sports and cultural events.”

According to the Cleveland Foundation and Gay Games website, the games waere created by Tom Waddell, a gay Olympic athlete. The first Gay Games was held in San Diego in 1982. The event has more sporting events than the 2014 Sochi Olympics.

Brian Wakely, a senior marketing major with a minor in LGBTQ studies, is volunteering with the Gay Games for summer 2014 this semester as an intern for the Akron Taskforce and culture and outreach subcommittees.

“My favorite experience while volunteering would have been this past October for the Annual General Assembly for the Federation of Gay Games in Cleveland,” Wakely said. “It was a chance to meet people from all over the world and hear about their involvements with the games over the years.”

Sokany said he hopes that students will be widely involved in the development of the Gay Games for the opportunity it presents.

“We want to show the world and participants that we are capable of accommodating such a big event,” Sokany said. “Hopefully, this will change some views people have on this area in terms of supporting the LGBTQ community.”

The Gay Games have taken place in a number of locations including Chicago, San Diego and New York City. The games have also been hosted by international locations such as Sydney, Australia; Amsterdam; Cologne, Germany; and Canada.

“Ohio hosting the games really shows a shift in the political views,” PRIDE! Kent president Brandon Stephens said. “All of Ohio is going to see gay athletes and supporters of the community join to host and compete in this event together.”

Stephens believes there is a stigma that exists in athletics across the nation against LGBTQ students.

“The Gay Games afford the LGBTQ community to express themselves in ways that society feels is inappropriate,” Stephens said.

Wakely said the games give hope that the global community will one day be able to move past its various prejudices and move towards a better future not only for the LGBTQ community but society as a whole.

“Many people ask why do we even need a Gay Games, and I think Russia’s stance on homosexuality in the Olympics is a perfect example of why athletes in the LGBTQ community need their own sporting events,” Sokany said.