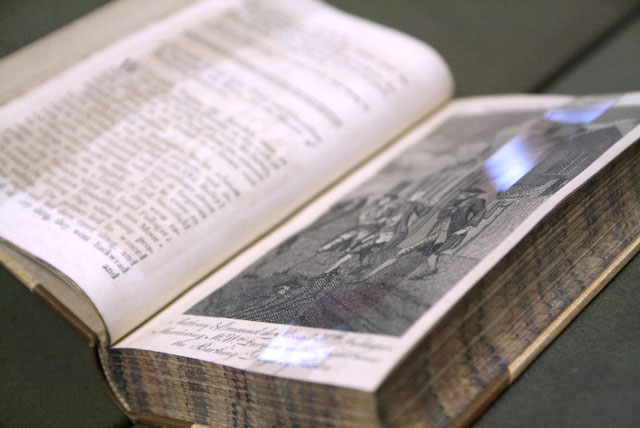 The 12th floor archive of the Kent State Library is featuring its True Crime Collection from 1-5 p.m., Monday through Friday, for the rest of this semester. This collection is a showcase of the true crime novels, with some dating back to over 300 years ago.

The 12th floor of the library is showing an exhibit on true crime this semester in honor of the 25th anniversary of the Albert Borowitz collection at Kent State.

“We’re doing a whole series of events, including a speaker in April,” public service librarian Amanda Faehnel said. “The whole point of the exhibit is for us to celebrate 25 years of us having the Borowitz collection here.”

Albert Borowitz was a lawyer who collected files and criminal artifacts from crimes and famous trials. Borowitz and his wife, Helen, who also has a display in the exhibit, shared an interest in crime that has influenced pop culture, film and literature.

“Albert and Helen started giving their collection to us in the 80s, and they donate a chunk to us every year,” cataloger Kathleen Medicus said. “The exhibit is showcased chronologically, from the 17th century stuff through stuff from the 20th century.”

“Jack Sheppard [an 18th-century English criminal] robbed people and did a lot of bad stuff, but he’s known for always escaping jail,” Medicus said. “He finally got caught at 22 and was executed. His criminal career was not very long, but he was kind of a mastermind.”

Borowitz attended Harvard Law School. Medicus said Harvard was not interested in Borowitz’s collection due to its lack of law material.

“It’s more of a cultural and humanities kind of collection,” Medicus said. “He was talking to friends in Cleveland, and somebody there mentioned, ‘Oh, my father’s publishing company collection is archived at Kent State.’ He approached us, and 25 years later, here we are,” Medicus said.

Medicus said Borowitz has spoken at the university before but will not be in attendance this year.

“This year, we wanted to honor Borowitz and not make him do the work this time,” Medicus said. “We’re actually bringing in a guy from Brandeis University who’s writing a book right now on the Charles Lindbergh baby kidnapping and kind of what a huge media explosion that was and how trials get depicted in the media.”

Medicus said one of the highlights of the showcase is the graphic collection display.

“It’s kind of hard to appreciate it if you’ve never seen this stuff before,” Medicus said. “There are poems and songs about people being executed. For us, it may seem totally bizarre, but to them it was their culture. This is what inspired…Charles Dickens. He went to this public hanging where there was a carnival atmosphere where 30,000 people were watching; it was entertainment. That partly inspired Charles Dickens to write ‘Oliver Twist.’”

The Special Collections and Archives department will have a trivia question on their Facebook page where people who have visited the exhibit can answer a question about the exhibit to try to win a prize.

The exhibit will be showcased on the 12th floor of the library for the remainder of the semester.