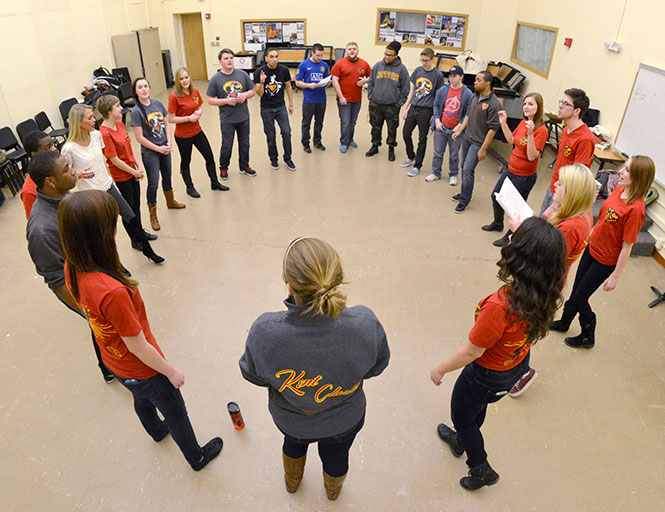 The Kent Clarks rehearse in the Music and Speech Center, Tuesday, Feb. 4, 2014. The contemporary a cappella group is preparing for the quarterfinals of the International Championship of A Cappella, starting Feb. 8.

Fun. Happy. Diverse. Energized. This is what describes Kent State’s first a cappella group on campus, the Kent Clarks. Since the group got together in 2011, these students have come a long way from being just another music group on campus.

“We’re a fun group,” Jason Watkins, Kent Clarks’ president and junior athletic training major said.  “We have a good time in and out of rehearsal, and we’re just really trying to get our name out. We want people to know about us on Kent’s campus.”

The 23-member music group practices three days a week learning new songs and choreography for performances, concerts and, most recently, something new — the International Championship of Collegiate a cappella.

The ICCA’s are the biggest a cappella competition in the nation; the Kent Clarks will compete against 49 other collegiate a cappella groups for the Great Lakes quarter finals Saturday, Feb. 8 at Bowling Green High School.

They’ve put in a lot of time and effort, working six to eight hours a week, to perfect their songs and choreography for the big competition.

“It’s been intense,” junior marketing major Rachel Barrera said.  “We’ve competed before at Wooster and an a cappella festival last year, but ICCA’s is a whole new level for us. I think everyone’s really pumped and excited to give it a chance. We’re a really young group to even be invited so we’re honored just being there.”

The Clarks will perform “Edge of Glory” by Lady Gaga, “Hide and Seek” by Imogene Heap and “Can’t Hold Us” by Macklemore.

“I think we have a pretty good chance,” said Matt Gilkerson, a junior marketing major and the Kent Clarks’ publicity director and publicity relations manager. “We have an awesome set list, cool choreography, great soloists and good blending. With the choreography and our songs it’ll give us a step up, and we’re doing some things to make it seamless.”

“I’m mainly excited for the opportunity to perform at a national level,” junior applied communications major Garrett White said. “Being recognized to say that we’re performing at a national level is just an amazing fact to me that we’re good enough to perform with the best in the country. It just makes me so excited for what the group has in store.”

Watkins said the group is still fairly young compared to some of the groups who have been in the competition.

“Just getting our name out there would be huge in the a Capella world; so even if we only won the first round or moved on and placed, having some sort of mention would be great for us,” he said.

What makes the Kent Clarks a unique music group on campus is how diverse they really are. They all come from different majors, and are different ages and different years in school.

“It’s cool because the group shows the diversity of the campus all encompassed with one group,” Gilkerson said. “Even though we’re so different in our lives, we all come together and blend into one with just our mouths and vocal chords. We’re not all music majors, and it’s cool because regardless of what we want to do after college, we are in this group for a reason.”

The Kent Clarks blend their singing, blending and harmonizing with beat boxing, which junior bio major Chris Myrick explained as “making weird shapes with your mouth and forcing air through.”

Watkins said the combination of multiple different voices enables them to create a sound that comes across as one, and is genuine with A capella.

The sounds come straight from an individual person; it doesn’t have to be amplified or made up.

“It is what it is – just talent,” Watkins said.

It’s obvious the Kent Clarks love what they do. In any of their practices, it’s hard not to see any of the members laughing, smiling and dancing around singing their songs. The group is always full of energy and is always down to try new choreography and songs with Meagan Eishen, the group’s musical director and senior theater studies major.

“Besides being an a cappella group, it’s a family for all the members, and it’s an awesome experience,” Gilkerson said. “You gain so much knowledge, you gain friends; it’s such a cool group to be in.”

The group as a whole is extremely excited to compete on the national level even though it’s been hard work.

“It’s worth it because we’re working toward a goal together,” Myrick said. “No matter how far we get, it’s fun to compete and see other groups.”

For more information regarding the Kent Clarks and when they hold auditions or have shows on campus, be sure to check out their Facebook and Twitter pages.