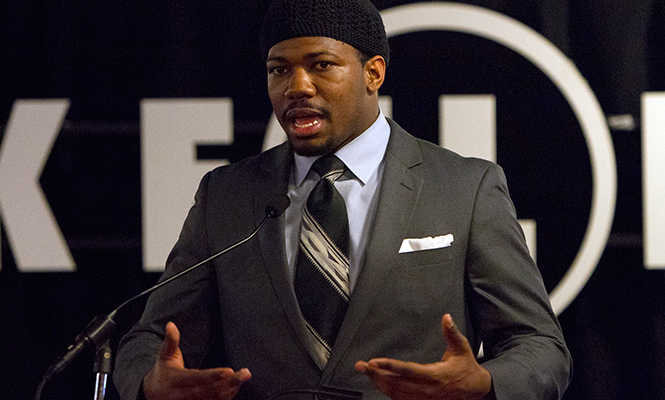 Kent State’s Undergraduate Student Government, or USG, hosted an open forum Thursday for the candidates running in the upcoming USG election. The candidates were invited to the Rathskeller to discuss their platforms and answer questions about the positions.

Not every candidate attended, but those who did were able to speak about their potential goals for their positions.

“I want students to graduate from Kent State with a leg up against the competition, with the real life experience and network opportunities that this awesome school gives to us,” he said.

Second to speak was Angela Cecys, a junior running for senator for the College of Education, Health and Human Services. She said she wants to use her personal connections in college to make a positive difference and improve the college.

Luke Sutton, Senator for the College of Nursing candidate, spoke next and outlined his goals to build relationships with local hospitals. He wants to get local businesses to send out job lists, and he wants to set up fundraising for students who need help paying for the nursing program.

Asti Ambartsumian and Tyler Westerman are the candidates for the senator for the College of Public Health. Both were interested in educating more of the student body.

“One of my biggest goals is to observe the college and see what students want,” Ambartsumian said. “I also want to educate people about what public health is and find student volunteer opportunities within the college.”

Westerman added onto the idea and said she aimed to fix “advising problems, not only within the College of Public Health but in other colleges” by creating more advising times.

A running theme throughout the forum was the thought that the Undergraduate Student Government needs to focus on reaching out to the student body and making themselves more known.

Katherine Cookson, candidate for director of student advancement, said that she wants to see the USG have more transparent policies between themselves and the student body.

Eric Dyne, the other candidate for director of student advancement, said that he wanted to see an increase in student participation, in organizations and events. He also highlighted his accomplishments with USG in the past, which were getting nuts separated from other food in the Kent Markets and getting lockers for commuters.

Lauren Buchanan, a sophomore running for the director of communications, agreed with the point that USG needs to foster more communication between itself and the student body.

“I want to mentor senators with their communications skills, how they can be proactive in their colleges and communicate with students and teachers,” she said.

Director of governmental affairs contenders Kayla Morrison and Robert Lierenz spoke next. Lierenz said, “My goal is to get as many people to show up as possible and disseminate information in a way that is important to the students.” He wants to pair with other organizations and the, bring a teamwork aspect to the position so they can communicate in a meaningful way.

Morrison also said that students had potential to make a big difference in politics.

“The crucial thing that this position needs to do is connect the students with the state and federal governments,” she said. “I want to empower the student voice.”

Hannah Ward is running to be re-elected as the director of community affairs. She wants to continue to educate students about their rights on and off campus and ensure that students are aware of and take advantage of the different resources that are available to them.

Three students are running for director of business and finance. Brian Cannon spoke first and said that his goal for the position was to ensure that all the money invested in student organizations was spent as efficiently as possible.

Dominique Cook spoke next and said that he wants to make more USG programs available to students.

“I want to reach out to students unaware of USG,” he said. “We can offer so much.”

Kelsey Meadows said that she wants to make the process of applying for allocations funds less confusing by creating an online application.

“I want to create a user-friendly app for the allocation process,”Meadows said. “I want to put the process and application online so that every student can use it.”

All three candidates also discussed how they would appoint an Allocations Committee, and all agreed that the committee would represent the student body accurately and equally.

Next, the two candidates for director of programming, Hunter Amrhein-Barnes and Kevin Otubu, spoke.

Amrhein-Barnes said that he had lots of experience on the programming board and that he has “been fortunate to be a part of something that’s exciting and rewarding.”

Otubu said that one of his goals as programming director would be to have bigger events in order to draw bigger crowds. He is also passionate about helping people and meeting new people on campus, he said.

Both candidates said they aimeto spend the money in their budget as wisely as possible to hold the biggest possible events and draw more people with more advertising.

Josh Lewis, write-in candidate for director of student involvement said he too wanted to expand USG marketing and advertising.

“I told my friends I wanted to run for USG and I can’t tell you how many stopped and asked me ‘what is USG?” he said. “As important as USG is we do not have the presence we should with the student body and other organizations on campus.”

Last to speak was candidate for Executive Director Marvin Logan. He started with USG as a street team member and has had four years of experience working with them, he said.

“I want to continue to press Kent State forward to become a powerful force, not just in northeast Ohio but also the nation,” Logan said.

Logan also mentioned the divide between the student body and USG and said that he hopes to reach out to them more during his time as executive director.

“The USG should not be a mystical creature that no one knows about,” Logan said.

Logan said that he thinks the problem is a lack of motivation on the parts of both the students and the Undergraduate Student Government.

“I think it’s first and foremost apathy,” he said. “No one is paying attention or aware of what we do and if they were, they would care, but it takes effort on our part to get involved with organizations. Our sphere of influence needs to expand outside of certain functions and we need to develop programs to promote the USG.”

Logan wants to get an intern program implemented into USG to train student leaders to do what they do best, he said. He also wants to continue to press the USG’s mission and the brand forward.

The USG elections will be held on Monday, March 5. For more information, visit the USG website or Facebook page.