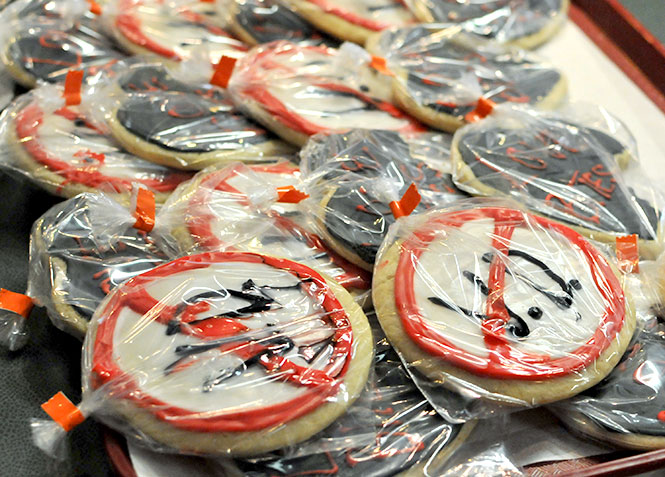 In protest of Valentine’s Day, people will congregate at Prentice Café to eat black and broken heart-shaped cookies, and some of them will publicly share why they and their significant other broke up. Bon Jovi’s “You Give Love a Bad Name” and Def Leppard’s “Love Bites” will likely be playing in the background.

The “Anti-Valentine’s Dinner”, which takes place from 4:30 to 8 p.m, is meant for people to come out and celebrate being single, Dining Services marketing manager, Justin Lagore said.

The first Anti-Valentine’s Dinner last year had a better turnout than many of the university’s other themed dinners, dining services director Rich Roldan, said.

This year there will be a “Why did you break up?” wall, where people can anonymously write down their breakup stories, Lagore said. Some of the stories will be posted on Facebook and Twitter.

It is also a good chance for the culinary team to show their skills, Lagore said. Curry said the food was more high-end than usual.

Despite a lot of black decorations and the “You suck” cookies, Curry said last year there was an element of friendship people expressed by pushing together tables and such that wasn’t at the Valentine’s Day dinner at Eastway, which she also attended.

“I think it’ll be fun,” Lagore said. “This is one of my staff’s favorite events to plan every year just because there’s a lot of room for humorous interpretation.”

Curry said she enjoys the themed dinners that Prentice puts on, and she plans to go to the “Anti-Valentine’s Dinner” again this year.