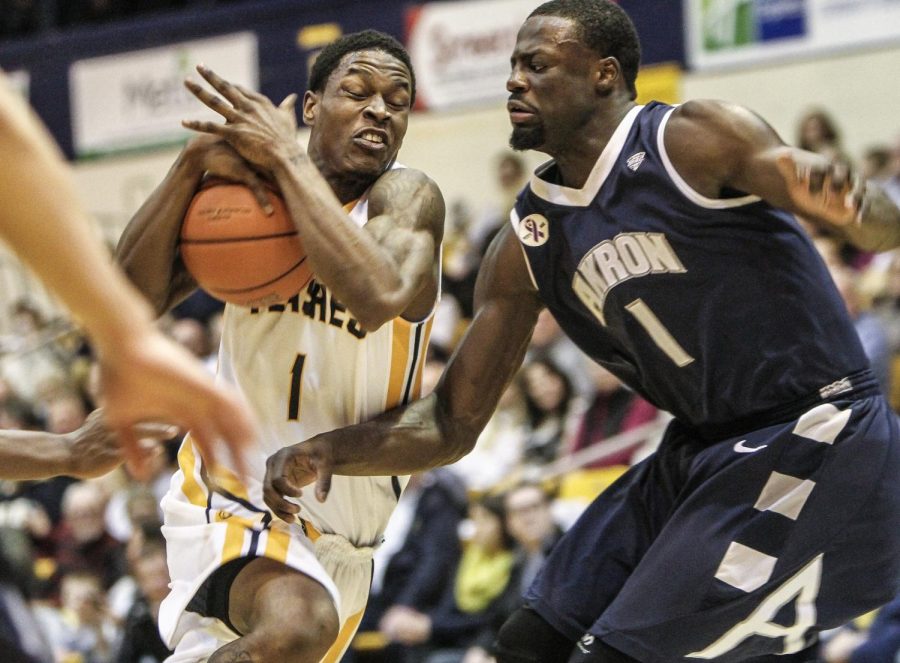 Junior guard Kris Brewer catches and drives the ball during the winning game against the University of Akron, Saturday, Feb. 1, 2014, at the MACC, with a final score of 60-57.

A physically exhausted and mentally frustrated Kent State men’s basketball team (12-11, 3-7 Mid-American Conference) is back home this week and is  preparing to go head-to-head with Bowling Green (10-13, 4-6 MAC) Wednesday and Central Michigan (8-14, 1-9 MAC) again Saturday, both inside the M.A.C. Center.

The Flashes are coming off a tough 70-53 loss to the Chippewas Saturday afternoon and look to bounce back this week to avoid their season from slipping away.

Kent State was 9-2 at one point this season, and now its record stands at 12-11 after Saturday’s loss.

The Flashes have dropped 9 out of their last 12 games, and the team has lacked the confidence on the court it had to start the season.

Kent State head coach Rob Senderoff said all the team can do at this point is try to stay positive and continuously look for ways to win as the season winds down and quickly approaches the final stretch of the season.

“Each game is important, and there’s not a ton of games left, and in my eyes, we’ve proven that we’re capable of being a very good team, but consistency has been a problem,” Senderoff said.

In regard to consistency, it’s been one step forward and two steps back. Every time Kent State gets a win, builds some momentum and things start looking up for the Flashes, the morale gets shot right back down again.

It’s been a Jekyll and Hyde story all season long.

No one ever knows which team opponents will see, including senior forward Darren Goodson, who is regarded by Senderoff and teammates as an emerging leader this season.

In Kent State’s last appearance against Akron, Senderoff said his team played its “best game of the year,” defeating Akron 60-57 in dramatic fashion and shooting over 50 percent from the field in the second-half.

The Akron Zips got a good look at Jekyll that night and witnessed just how good the Flashes can be when they get hot.

The following two games against Central Michigan and Eastern Michigan (13-10, 55-MAC) though, Hyde showed up and made his presence felt.

Kent State came out against the Chippewas and built up a seven-point lead going into halftime, but in the second half, the Flashes managed to blow their lead just as quickly as they built it up and fell to Central Michigan 78-73 in overtime.

When the Flashes faced the Eagles three days later, shooting percentages continued to plunge. Kent State shot a mere 34.6 percent from the field, and the three-point shooting numbers were even worse — 15.4 percent on a 4-for-26 effort from beyond the arc.

The men’s basketball team has been trying keep its Hyde persona in check all season long, but like any split personality disorder, it’s hard to treat — and fix.

Senderoff has been trying to keep positivity and energy levels up both on the court and in the locker room during this final stretch of season left.

The Flashes only have eight games remaining to get back on track, and the MAC playoffs will start exactly one month from now.

“Hopefully over these last games we can play the way we’re capable of playing all the time,” Senderoff said.

Senderoff said some the guys have been feeling down, defeated and just plain tired from all the work and travel they have been putting in week after week, but positivity is the one thing the team refuses to let fall by the way side.

“We know that we’re not gonna have a perfect season and we know we’ve been losing some games, so we just gotta stay positive and keep working hard,” redshirt-junior guard Derek Jackson said. “A lot of people’s confidence is low right now, so we gotta keep believing.”

Junior guard Kris Brewer reiterated Jackson’s comments and said his team needs to find a way to get the energy and magic the team had when it faced Akron back.

“We just gotta get together and get that fight back in us and just come together to play as a team,” Brewer said.

Brewer, who only had two points in his last game against Eastern Michigan, has been struggling as of late on the scoring end and hopes to turn things around in the next few homes to produce more for his team.

“Last game I didn’t have a good game scoring,” Brewer said. “[Eastern] was playing a 3-2 zone [defense], so it was kind of difficult to run the type of plays we wanted to run against them.”

That same 3-2-zone defense was the same defense that frustrated Kent State’s three-ball in the Eastern Michigan game. Senderoff said the Flashes need to work the ball in the paint more in their game against the Falcons this Wednesday to help open up shots around the perimeter.

Senderoff and Jackson both said playing the ball inside out — establishing an inside presence and then work the ball to the outside to set up good, quality three-point shots —  will be key.

Whether the Flashes are hitting or missing, winning or losing, one thing is for certain: Kent State will come out of the gates fighting and rarin’ to go this week against Bowling Green and Central Michigan.

“When teams see us now, they probably think that we’ve quit, but we gotta go out there and play like we haven’t quit,” Goodson said.

With Hyde always lurking in the shadows, Kent State hopes to block out any looming negative energy and concentrate on making one final push before the MAC Tournament on March 10.

“I’m looking forward to Wednesday to seeing us play well against a good team in Bowling Green that’s only one game ahead of us in the standings, and if we can win that game, then that would be great for us,” Senderoff said. “We got to come out really hard and compete at a high level.”

Wednesday night’s game against Bowling Green will begin at 7 p.m. inside the M.A.C. Center.