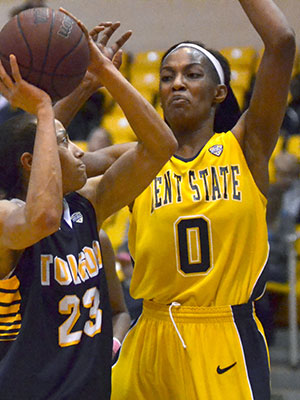 Redshirt junior center CiCi Shannon attempts to block in a game against Toledo on Sunday, Feb. 9, 2014. Shannon scored a personal record high, but Kent State ended up losing the game 83-55.

Kent State junior center CiCi Shannon has a knack for deleting or otherwise bothering opponents’ shot attempts, specifically in the paint. Shannon has learned to use the combination of her frame and athletic ability to her advantage.

Shannon’s collegiate career began at Southern Illinois University, where she had an immediate effect on the team and her teammates.

Those are some pretty nice milestones to set at such a young age, but Shannon wasn’t completely satisfied with her performance quite yet.

During her sophomore year, Shannon took a major leap forward from the prior year and averaged 2.2 blocks per contest. Shannon also had five different games where she recorded five blocks that year.

After her sophomore year, Shannon decided to transfer to Kent State. Shannon was forced to sit out the entire 2012-13 campaign because of NCAA transfer restrictions.

“We have really benefitted from having CiCi on the floor for games this year as opposed to just being in practice during her redshirt season last year,” Kent State Coach Danielle O’Banion said.

The time off did not deter Shannon from setting those same impressive numbers in her first season with the Flashes.

In her first game with the Flashes, Shannon recorded a five-block performance against Eastern Kentucky.

“CiCi has the natural ability to block shots,” O’Banion said. “Shot blockers need to have good timing and CiCi has that good timing. It also helps CiCi that she is 6-foot-4 but she is surprisingly athletic for a player her size. I think her timing and length are really the keys to her success on that end of the floor.”

With only seven games remaining in the season, Shannon is currently ranked second for the most blocked shots in the Mid-American Conference, averaging 2.2 blocks per contest.

“I think I have been a consistent shot blocker because of my wingspan and good practice of timing the jump,” Shannon said.

There is no doubt that Shannon benefits from her 6-foot-4 frame. But the timing of her jump is also a key factor in being ranked towards the top of the M.A.C. in blocks per game.

Shannon also believes her defensive play has a bigger effect than just being ranked one of the top 25 shot blockers in the nation.

“I try to believe my play has an effect on my teammates. I try to block shots to get my teammates hyped up and more excited, I feel like it gives us momentum when I block shots,” Shannon said.

Shannon’s head coach has really noticed the growth of the junior center throughout the past two seasons.

There is no doubt that the rest of the team feeds off of the way she plays the game, O’Banion said.

“When CiCi blocks one, you can see our bench erupt, and you see her teammates rally around her. So her having that interior presence unquestionably helps our defensive competence.”

One thing Shannon has gotten better with over time is not fouling when attempting to block a shot, O’Banion said.

“Earlier in the year, it was not unusual for CiCi to foul out when going for blocks. Now, she seems to be a bit more selective when attempting to block a shot,” said O’Banion.

Shannon has certainly learned from her mistakes and she has only fouled out of three games this season, two of them came in the month of November.

Shannon has also been in the gym working hard on her offensive game.

Assistant coach Geoff Lanier, who works with the Flashes’ post players, is certainty noticing the improvements Shannon has made on that side of the ball.

“What stands out the most to me is the fact she is presenting herself as a very big target for her teammates,” Lanier said. “That is something she has had to work hard on over the last year or so. She has done a really nice job of making herself available to the basketball and allowing us to not have to work overly hard to get the ball inside to her.”

Lanier said that Shannon has begun to learn how to use her size to create space down low.

“If they get beat, they know they have that security blanket behind them. There are certainly moments when you need someone to step up, and make a play, and a kid who can go block a shot can bail you out of many situations,” Lanier said.

“Her ability to block shots is definitely a game changer; she creates a very low offensive-field-goal percentage for whatever kid she is guarding,” Bowling Green Coach Jennifer Roos said.

Roos said that her game plan usually calls for her players to draw Shannon from the paint to make her defend on the perimeter, where her game is weaker.

“She redshirted a year, so she had the ability to watch for some time. I really think you can pick up a lot of things from watching from the sideline and become a better basketball player. She is always in the right place at the right time and you have to take notice of that,” Roos said.

Danielle O’Banion has to be ecstatic about the improvements made by her junior center on both sides of the ball. The fact that she will be back next year for her senior season gives the Flashes an immediate leader and impact player for the rest of this season and heading into the 2014-15 campaign.