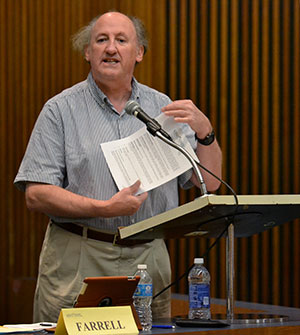 Just before the Board of Trustees announced Beverly Warren as the next president of Kent State Jan. 8, a select few Faculty Senate members were interviewing her on the second floor of Rockwell Hall.

“We were [emailed] the night before the announcement about an urgent meeting in the morning, but it didn’t say why,” said Donald White, vice chair of the Faculty Senate Executive Committee and mathematical science professor. “It’s a little bit frustrating to interview a candidate as they are making preparations outside.”

“[The board] took her away without even asking our opinion [on Warren],” White said. “The meeting with her was strictly a formality.”

Faculty Senate unanimously passed a resolution to see a “short list” of presidential candidate finalists once the list had been formed Nov. 4, according to senate meeting minutes. No such list was provided.

“Most faculty that I’ve spoken to feel quite insulted,” Faculty Senator, Tracy Laux said. “The university has shared governance, and it didn’t take place.”

Laux added that Warren “seems like a good hire” and has the desired qualifications for the job, but much of the faculty was upset with how the search was conducted.

White said that while there is still no response to the faculty’s request to see the list of finalists, he believes there is nothing the senate can do.

“Technically, the board…makes university policy, so I guess they can ignore it,” White said. “They don’t really answer to the rest of us.”

The secrecy behind the presidential search is not uncommon to Kent State. When the board selected Lester Lefton to take over as president in 2006, the senate was surprised when the candidate names were hidden, Laux said.

“It was the same secrecy [as with Lefton]. This time, we were more cautious. We didn’t want this to happen again, and it did,” Laux also said.

The resolution passed Nov. 4 states the secrecy used in bringing in Lefton “made his transition into the position and acceptance by the faculty and staff an unnecessarily complicated and time consuming process.”

The reasons behind the secrecy with the search process are still not clear for Faculty Senate member and psychology professor David Riccio.

“I can understand early on in the process if 50 people have their hats in the ring,” Riccio said. “Only one will win, and 49 [other candidates] are embarrassed or might lose standing with current [institutions].”

Riccio said all candidates for the position should be willing to take this risk, regardless of if the process is secret or not.

“I’ve never been completely satisfied with the reasons for transparency, but I’m very hopeful,” Riccio said. “Everything I’ve read about [Warren] is very positive.”