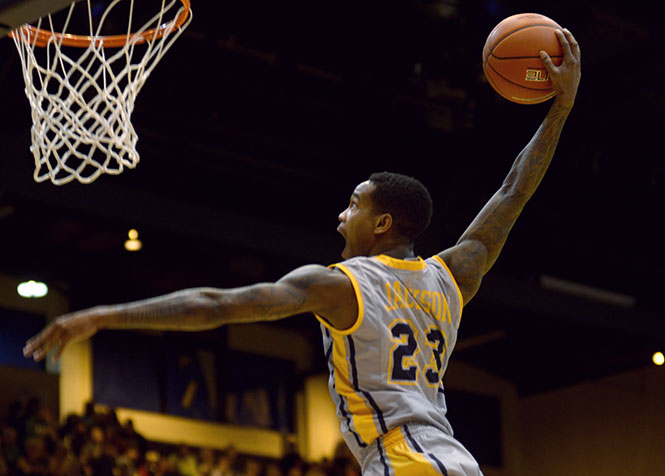 It was a rollicking start to the season for the Kent State Flashes, who won eight of their first ten games and only failed to top 70 points twice.

But the law of averages is in basketball more like dogma; every hot shooting streak seems to have an equal and opposite run of bricks. After that hot start the Flashes split the next four games, putting their record at respectable but not-quite-extraordinary 9-4 going into Saturday night’s home game against Ball State.

The Flashes spent most of the first half down after Ball State jumped ahead to a 20-7 lead. Early in the half the Cardinals seemed determined to establish a presence in the paint, and they pounded the ball inside to senior center Majok Majok on nearly every possession. Majok would hit his first five shots from the field, all of them layups, and lead his team with 12 points going into the break.

Ball State’s success in asserting itself near the basket, coupled with yet another poor start shooting the basketball, had things looking grim for the Flashes for most of the first period. But tougher defense on Majok and an offensive surge led by senior forward Darren Goodson brought the game back to within a point with just 80 seconds left to play.

Goodson absolutely took over the game during a crucial sequence of possessions at the end of the half  . He hit a three, got inside when he wanted to and even drained a few jumpers from mid-range.

“I was just trying to lose myself in the game,” Goodson said after the game.

As a team, the Flashes improved their shooting percentage from 35 percent with four minutes remaining to a respectable 41 by the time the horn blew for the half.

But a crucial four point play — junior Kent State guard Devareaux Manley fouled Ball State freshman Mark Alstork during a three attempt — took the wind out of a home crowd that had just gotten back into the game. After another Ball State three opened up the second, the Cardinals’ lead extended to 10 points.

As soon as coach Rob Senderoff switched to a full-court press about six minutes into the second half the tide seemed to change for the Flashes.

After only managing one steal in the first half, the pressure started to open things up in transition.

Freshman forward Chris Ortiz had an electrifying block which lead to an easy Kellon Thomas fast-break layup, pulling the Flashes to within one.

On the next trip down the floor, Goodson hit a tough fadeaway jumper in the lane and got the foul. The Flashes went up by two and would never relinquish the lead.

Goodson ended up with 23 points on 9-of-12 shooting with no turnovers in 28 minutes of action off the bench for a season-high.

“He was the difference in the game,” Ball State coach James Whitford said after the game. Goodson turned in a bona-fide all-around performance. Aside from the scoring, Goodson lead the team in rebounds and his passing prompted Whitford to compare him to NBA great Marc Jackson.

The Flashes got another efficient performance from junior guard Kris Brewer, who managed 18 points on only nine shots. The team shot 64 percent from the field in the second half and managed to render Majok, who was dominating early, all but invisible in the second half. After starting five for five, Majok would miss five of his last six shots from the field.

Kent State now heads into the grind of the Mid-American Conference schedule. The team travels to Northern Illinois for a Wednesday night game against the Huskies and will continue to play about two games a week for the rest of the year.