Kent State wrestling team to defend No. 25 ranking in Ypsilanti 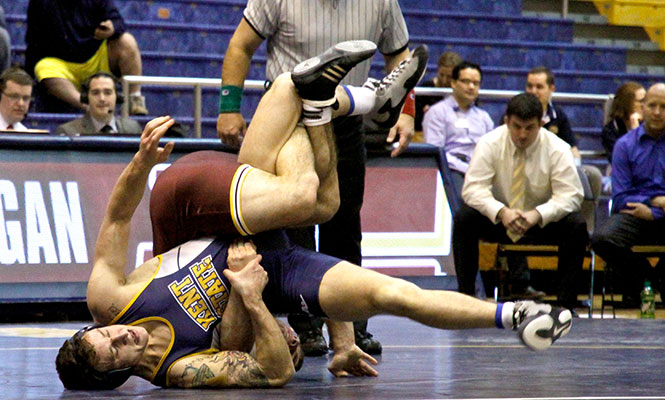 The Kent State wrestling team (8-8, 2-2 Mid-American Conference) will take a trip up to Ypsilanti, Mich., to face the Eastern Michigan Eagles (8-5, 1-2 MAC) after dropping their last two matches to conference rivals this past weekend.

The Flashes are coming off losses to Ohio University as well Central Michigan University. Those two losses evened their conference record at 2-2 as they were previously undefeated in the conference with dominant wins against Old Dominion and Buffalo.

The Eastern Michigan Eagles are also looking for a victory after four consecutive losses despite starting the season out with a strong 8-1 record.

Kent State might be without wrestler Ian Miller this match after his injury in the match Sunday against the Chippewas. Miller was forced to injury default his match after suffering an injury to his left arm. He also comes into this week ranked sixth in his weight class despite this injury.

“I think we’re a better team than them even without Miller,” said Coach Jim Andrassy about Eastern Michigan following the team’s loss Sunday. “I’ll be more concerned with Northern Iowa and Missouri when we face them.”

Sophomore Mike DePalma, ranked 21st in his weight class, may also sit out while trying to heal an injury he has been wrestling through lately.

Sophomore Sam Wheeler had a stunning comeback performance after being down 6-0 in his match against Central Michigan. Wheeler will try to keep his fantastic season going while facing a familiar opponent. Senior Phillip Joseph of Eastern Michigan and Wheeler have wrestled before and will likely be matched up Friday for the 184-lb. bout.

“I plan to work hard this week,” said Wheeler. “He beat me last year in the MAC Tournament.”

That match in last season’s conference tournament ended in a 6-3 decision in favor of Joseph. Sam Wheeler currently sits at the eighth spot in this week’s WrestlingReport.com rankings.

Although having a fairly good record this season, Eastern Michigan’s roster does not hold any wrestlers in the top rankings yet this season. Along with DePalma, Miller and Wheeler, the Flashes currently have four other wrestlers featured among the rankings: sophomore Mack McGuire (133 pounds), junior Tyler Small (141 pounds) and junior Caleb Marsh (174 pounds).

The Flashes and Eagles will take to the mat Friday evening at 7 p.m. at Eastern Michigan’s Convocation Center.

Michael Mann is the wrestling reporter for the Daily Kent Stater. Contact him at [email protected]