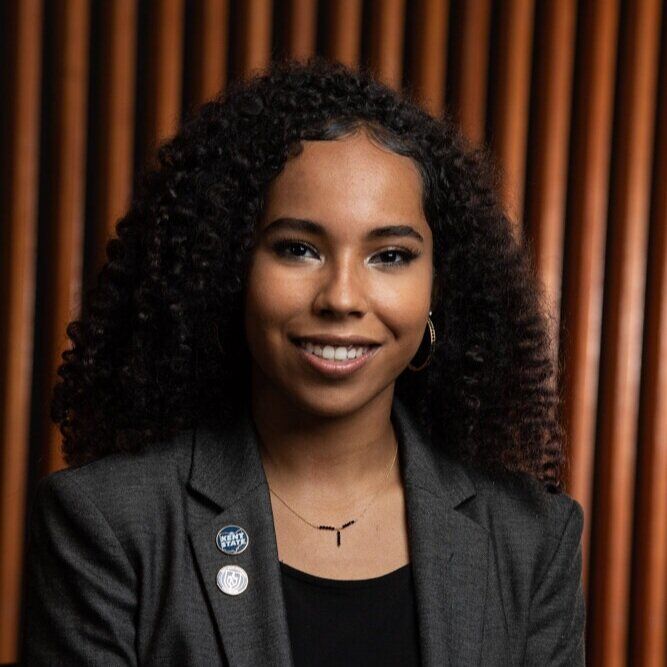 A new Kent State policy went into effect Jan. 11 that is intended to set some rules around how the Front Campus rock is used and painted, following a series of messages in September that included “White Lives Matter” and “Blacks have no home here.”

The policy establishes “any painting on the rock will remain for at least a twenty-four-hour period” and requires that “the rock must be painted in totality” with no comments or partial paintings allowed, among other guidelines. It also states that “obscene” paintings, or those “in violation of the university policies regarding unlawful discrimination and harassment” and/or “directed to inciting or producing imminent lawlessness” can be painted over or removed.

One of the first things the group had to ask was, “‘Why are we making this policy? What’s the point of a policy like this?’ because we didn’t have anything like that before,” Moore said. “And I felt, as well as many other students, it was important to have more guidance for how the rock should be used. Because there wasn’t anything saying what you could or couldn’t do.”

Hylton said he hopes the policy can provide “clarity around the intent and the spirit” of the rock, which has been a part of the Kent State community since the 1920s. The tradition of painting it began in the early ’70s, according to an article in the Daily Kent Stater.

“It’s always been a place for speech to go forward broadly,” he said. “And I think we still see that … but I don’t foresee us not using the rock in the same ways that we had used it previous to the fall.”

The committee had to consider the legal elements of the policy, including the First Amendment and whether the policy would infringe on free speech, Moore said.

“The Student Code of Conduct covers … behaviors that happen on or off campus, and any violation of any university policy would be subject to disciplinary action. So this newly developed rock policy is no different,” Hylton said. “It falls in line with every other student-related behavioral policy.”

Frank LoMonte, director of the Brechner Center for Freedom of Information and an attorney who specializes in the First Amendment and media law, said the policy may be too “subjective or open-ended.”

“The university doesn’t have to let anybody paint on any part of their property that they want to,” LoMonte said. “If they wanted to have a no-painting policy or no-chalking policy, they could probably do that. But once you hold out some piece of property, whether that’s a bulletin board or the sidewalk, or a rock, and you say ‘speech is welcomed on this piece of property,’ then you have to get very careful about getting into the business of picking and choosing whose speech gets to be heard.”

But Eric Mansfield, the university’s assistant vice president for university content strategy and communications, said, “The university has the right to regulate university property as to how it’s used.”

Obscene speech and threats of violence are already considered unprotected speech under the First Amendment, but offensive speech is still protected, LoMonte said.

“Any rule or regulation, policy or handbook that is inconsistent with the First Amendment is not legally enforceable,” LoMonte said. “You can have all the rules and policies that you want to, but if those rules give people fewer rights than the First Amendment, then those are void rules — they’re not enforceable.”

LoMonte said a court would ultimately determine if the message goes so far that it is no longer protected.

“There’s a chance the courts are going to say, ‘well, when you start interfering with the ability of other people to feel that they can safely enjoy the benefits of their education,’ now you’ve gone too far and now you’re not protected,” LoMonte said. “Even there — offensiveness is not the threshold.”

The process of writing and enacting the policy was one both Hylton and Moore described as personally “meaning a lot” to them.

The policy was “born out of, you know, a really, really terrible series of incidents that rocked our campus to the core, rocked our community to the core,” Hylton said. “And it makes me feel that we maybe accomplished a little bit.”

The committee felt the policy would serve as a way to turn words into action, Moore said.

“I don’t think any of us were expecting to see the events of last semester, and to be a Black woman elected, and to see that happen on campus, on our campus — it did hurt,” Moore said. “I think that’s what really motivated me … to really get involved in this and to take it seriously, and to make sure we saw change, and we saw something actually happen out of it.”

Students are encouraged to familiarize themselves with the policy, and to continue to speak up and ask questions, Moore said.

“I really hope that people can understand the reason why this policy is here, and why it’s important, and that we can come together to kind of make a better, more welcoming community, and prevent these things from happening,” Moore said. “And I think even if there are negative conversations about the policy, those are still important to have. I think having a conversation, even if it’s a difficult one, is always important.”