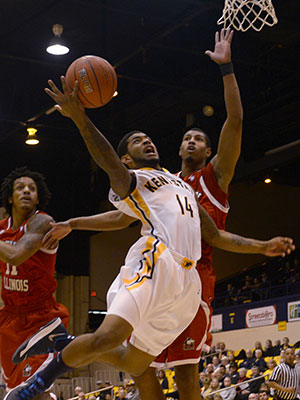 Some rivalries are created simply to make money or to spice things up in a conference. Others are born.

The Kent State-Akron rivalry is one that stems from proximity – two cities within 15 miles of each that share this mutual resentful respect for each other. Whether it’s a football game or a gymnastics meet, both sides will battle it out year after year in constant attempts to outdo each other and vie for a chance to be tabbed the elite school in the MAC.

This competition began back in 1945 when Dr. Raymond Manchester, Kent State dean of men at the time, suggested the ancient artifact, known today as the wagon wheel, be offered to the winner of the annual Akron-Kent State football game.

Kent State and Akron crossed paths three times last season, with Akron getting the 2-1 edge in the end. The season score was tied 1-all after two regular season meetings, and the Zips got the best of the Flashes in the rubber match with a narrow 62-59 win that ended Kent State MAC tournament run.

This season, Kent State and Akron’s MAC schedules seem similar considering they are in the same MAC division, but one team’s league success has been unparalleled.

Akron is currently sitting atop the MAC’s East Division with a 6-1 conference record, their only loss to West Division-leading Toledo, and rides a three-game winning streak into Kent this Saturday.

The Flashes’ have an entirely different story.

The team started out the season 9-2, but once MAC competition began back in the beginning of January, the Flashes fell off the wagon.

Since that initial success, they have been sitting at the bottom of the MAC’s East Division with a 2-5 record and dropped their last four games.

Still reeling from Wednesday night’s 50-49 disheartening loss to the Northern Illinois Huskies, the Kent State basketball team (11-8, 2-5 MAC) will look to recover as the team gets set to renew its rivalry with the Akron Zips (14-6, 6-1 MAC) Saturday night in the M.A.C. Center.

The renewed rivalry between the two teams is a story of contrast.

The Flashes and Zips are both coming off of conference games, but two very different games in regard to the outcome.

Kent State managed to blow a 13-point lead at one point in the second half of its in-conference game against Northern Illinois and ended up losing with only 5 seconds remaining on the shot clock.

The Flashes started out the game strong on both sides of the ball three-fourths of the way into the game, but things fell apart when Kent State committed 12 turnovers and only shot 35 percent on 7 of 20 shooting from the field down the stretch.

Senderoff said he was very disappointed with the way the offense performed as a whole.

“I think we scored 5 out of the first seven positions in the second half, we have a 14-point lead and then we don’t score the rest of the game,” Senderoff said. “We gotta play better.”

Akron had six players in double-figure points in its 73-46 drubbing of the Ball State Cardinals. The Zips shot 48.1 percent from the field, 41.7 percent from three-point range and a staggering 92.9 from the free throw line. They also forced 16 turnovers during the contest, converting the Cardinals’ errors into 16 points of their own.

If the Flashes hope to stay relevant in the MAC and gain some leeway in the Wagon Wheel Challenge against the East Division-leading Zips, they are going to have to find the improvement for which Kent State head coach Rob Senderoff has been pleading for for three weeks now.

Three marquee players that will need to step up and lead the Flashes to victory are junior guards Kris Brewer and Devareaux Manley and senior forward Darren Goodson.

Brewer, who is averaging 12.1 points per game this season, was held to just two points Wednesday night and missed all seven shots he attempted.

“He’s the fastest guy in America, but he was 0-7 and 0-4 from three [in the Northern Illinois game]” Senderoff said in the post-game press conference Wednesday night. “We play against Toledo, he’s arguably the best player on the floor, and tonight he really struggled.”

Manley is another key player to the Kent State offensive unit with his forty from three, but he too struggled Wednesday night against the Huskies. He turned the ball over (two times) more than he shot the ball (one time) and only saw 11 minutes of action in the 40-minute game.

Senderoff said Goodson, who kept the Flashes alive Wednesday with a team-leading 10 points and three assists, is frustrated right now just as his teammates are, but he must try his best to put those frustrations behind him if the Flashes wish to dig themselves out of the hole in which they dug themselves and avoid an impending five-game skid.