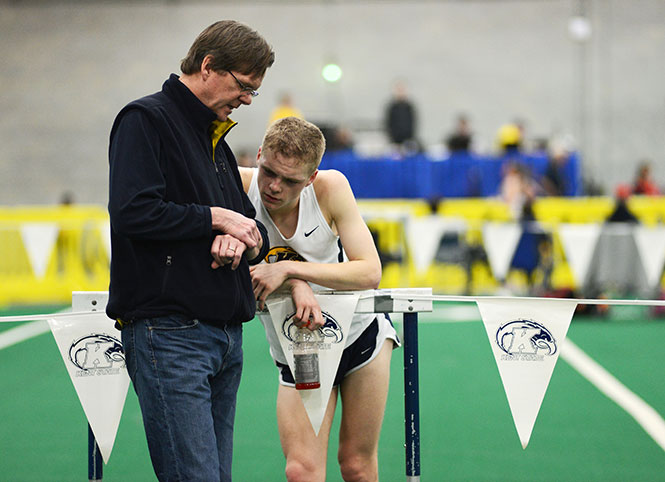 Sophomore Conor Whelan discusses his race time with his father after running the 5000 metres race at the dual-open Doug Raymond Invitational at the Field House, Saturday, Jan. 11, 2014.

The atmosphere was electric at the Field House last Friday night as Kent State men’s and women’s track teams took on Akron in a heated matchup of crosstown rivals. With a sizable crowd on hand, Kent State came out with a strong performance, defeating Akron 156.5-145.5 in the dual meet.

The women’s team, ranked No. 16 in the latest U.S. Track and Field and Cross Country Coaches Association indoor track and field rankings, came out victorious with an 83-68 win.

“I think the women did a great job showing their strength,” said Bill Lawson, Kent State Director of Track and Field.

Senior Joh’Vonnie Mosley, who is ranked fourth in the nation, continued her dominance in the shot put Friday night, winning with a mark of 54-08.00.

“[She] had two great weekends in a row,” Lawson said on Mosley’s performance.

Junior Ann Marie Duffus also had a strong showing for the women, winning in two events. Duffus came out on top in both the long jump —  leaping 19-08.25 and the 60-meter hurdles.

Other winners on the women’s side included Roseanne Erickson in 60-meter dash, Chanitta Westbrooks in the 200-meter dash (24.92 seconds), Lauren Burnett in the 800-meter run, Hannah Fleck in the mile run and Alexandria Vintevoghel in the 3000-meter run — finishing with a time of 10:14.19.

The men lost in tight competition 73.5-77.5, but Lawson said he thought it was not a bad display for the Flashes.

“I think the guys had a pretty good performance overall,” Lawson said. “We have some guys doing a good job.”

Lawson ran to the finish line to embrace sophomore runner Wayne Gordon, who posted the second-best 200-meter time in Kent State history with a time of 21.06 seconds.

Gordon mirrored his counterpart Delophant, taking home the MAC Men’s Track Athlete of the Week award. His 200 meter dash time was good for first in the MAC and tenth in the nation.

Winners included the aforementioned Gordon in the 200-meter, who also came out on top in the 60-meter dash and led the men. Junior Miles Dunlap took the 400-meter dash, finishing with a time of 47.87 seconds, and William Barnes placed first in the 60-meter hurdles in 8.06 seconds. The men also had a strong performance from the 4×400 team consisting of two freshmen  — Matthew Tobin and Andrew O’Leary — who took first place in the event with a time of 3:14.98. Michael King took first place in the shot put, and freshmen Reginald Jagers won the weight throw with a toss of 18.96 meters. Donovan Tolbert closed out the event by winning the triple jump by .01m.

“I’m really impressed with us,” Lawson said. “We’ll see how we get better in the coming weeks. We will get better.”

With five men missing from the meet, Lawson said he was excited that “we [had] more firepower sitting on the sidelines getting ready to go in the next weeks.”

The team will hope for a repeat performance as it heads to Bloomington, Indiana to take on the Indiana Hoosiers in the Gladstein Invitational on Saturday.